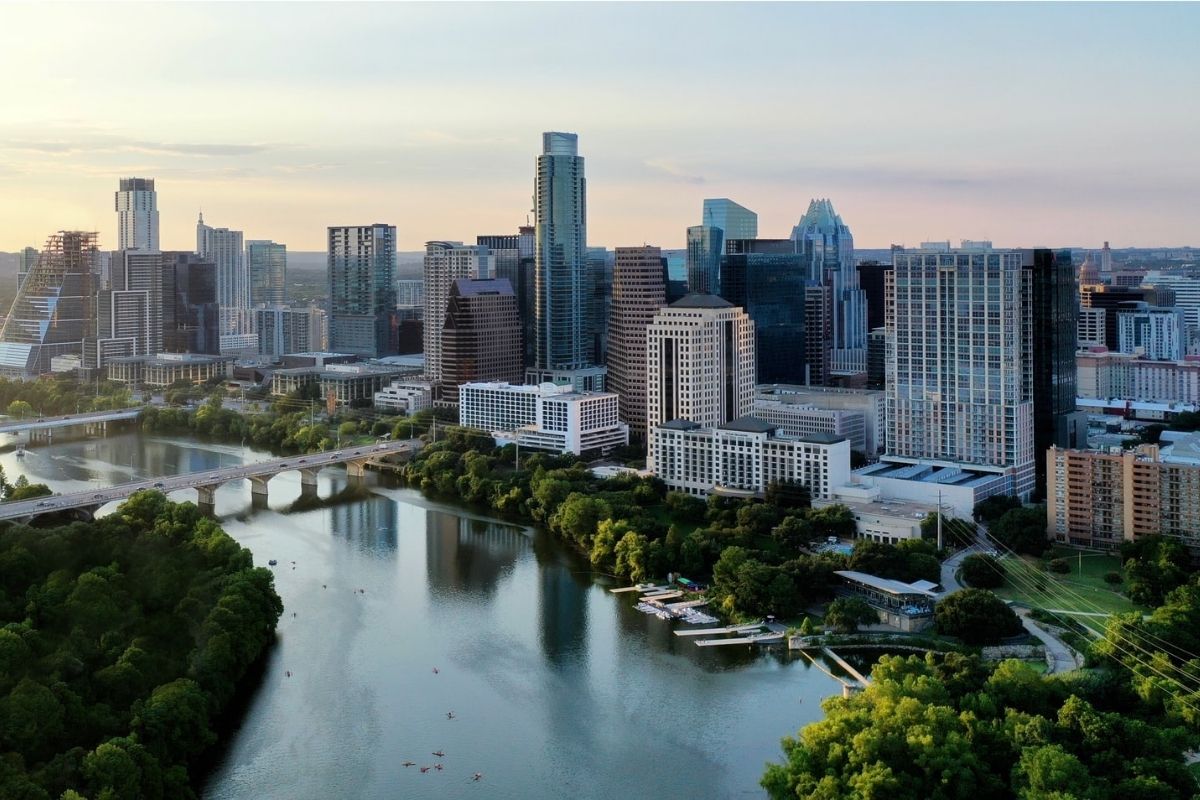 The Best Neighborhoods in Austin

Darcie Duttweiler
ABOUT THE AUTHOR
A native Austinite and a proud bearer of an English degree, Darcie parlayed her love of impeccable grammar into a writing career, writing for several local publications, including Tribeza and Austin Monthly. When she's not at her computer, you'll find her at a movie theater, practicing her crow pose, snuggling with her cat, sipping a goblet of wine, or eating a cheeseburger.

With more than 300 days of sunshine per year, a bustling music scene, nationally-recognized restaurants, and plenty of greenery and swimming holes for outdoor recreation, it’s easy to see why Austin ranks consistently on “best places to live” lists. With outposts from tech giants like Google and Tesla, plus local businesses, and satellite coworking spaces, it’s no wonder why so many remote workers want to spend time here. Although Austin is very much a car-centric city, there are several neighborhoods where you can ditch your vehicle and get around by bike or on foot. When it comes to the scarce parking situation, especially in East Austin and downtown, having alternative transportation can help.

Locals may poke fun at the plethora of Californians flocking to their fair city, but the Texan town is still known for its laid-back and friendly attitude. Relocating to Austin for a few weeks, months, or even permanently is easy. So, whether you’re brand new to Austin or are looking to explore more of the city’s numerous neighborhoods, this list will help you get started.

Downtown Austin is a small neighborhood located from 15th Street at the northern border to Lady Bird Lake at the southern. Once upon a time, Downtown Austin was thought to be desolate after the workday was finished, but the area was revitalized in the ‘70s and even more recently urbanized when several condos and apartment buildings shot up. Now it’s more bustling than ever before with performing arts, art galleries, museums, live music, restaurants, bars, and the famous hike-and-bike trail. It’s also a perfect locale for those who want to live near and frequent several coworking stations, such as Common Desk and Industrious without having to get in a car.

Here, you can go on a glam date night with cocktails and dinner, or catch a concert at ACL Live. If you want to relive your college days, go bar hopping on “Dirty Sixth” or on Rainey Street. In the summer, the historic Paramount Theatre is the perfect place to cool off during its classic movie series, which plays iconic films like Casablanca and Lawrence of Arabia. Another fun day out would involve visiting Contemporary Art Austin, an art museum decorated on the outside with a  funky mural that pays tribute to Daniel Johnston, the artist behind Austin’s iconic “Hi, How Are You?” mural located in Central Austin.

For those looking for a short-term rental close to many amazing restaurants and watering holes, it doesn’t get any better than East Austin. No matter what kind of pad you’re looking for–either a contemporary, brand new build or an older, quaint bungalow, you’re bound to find something in East Austin that fits the bill. It’s also ideal for those looking to ditch their car if you want to bike downtown to the area’s numerous coffee shops, like Bennu Coffee, which is open 24/7, and coworking spaces like the gorgeous Cathedral which has set up shop in a renovated church building.

After dining out at famous eateries like Franklin Barbecue, Suerte, and Birdie’s, you’ll want to take advantage of East Austin’s live music venues where you can enjoy bands any day of the week. Genres run the gamut from punk shows at Hotel Vegas to folk music at the Scoot Inn and even blues at the legendary Victory Grill, so there really is something for everyone. For those seeking culture, there’s the George Washington Carver Museum, Texas State Cemetery, and Big Medium’s East Austin Studio Tour. The local organization Six Square aims to preserve the historic Black legacy of the neighborhood and offers informative walking tours and other events throughout the year.

West Austin, which is the area east of the Mopac Expressway, is the most expensive neighborhood in the entire city—and for good reason. It’s a beautiful place to live that provides many nice views of the surrounding area’s rolling hills. If you want a city experience and plenty of access to nature and outdoor recreation, this is a good place to be. West Austin might not be the easiest place to commute from, as there are usually single roads leading out to subdivisions. And although biking does occur on the 360, it can be quite treacherous even for the most seasoned cyclists. However, for those looking for a large home with a big yard (and maybe even a pool or lake access!), West Austin can be a great choice for a more laid-back remote work vacation.

With easy access to hiking trails at the Greenbelt and the nearby Mount Bonnell, you can plan many sunset hiking sessions. The top of the hill is very scenic, so you’re bound to catch a proposal or two if you come often enough. When the urge for swimming overtakes you, you can take the whole family to Volente Beach Water Park, or if you prefer to bare it all, take a trip to the clothing-optional Hippie Hollow Park. The Westlake and Bee Cave areas offer several places to eat, especially at the Hill Country Galleria, but none of the restaurants are quite as hip as in the East Austin neighborhood. Along the water, however, you can explore some old-school Austin institutions, such as Hula Hut, Ski Shores Cafe, Mozart’s, and the Oasis, which are all worth a visit.

As Austin has grown and expanded, its neighborhood boundaries have greatly shifted. North Austin used to get a bad rap for housing soccer moms and tech bros, but now it has a wealth of delicious restaurants, plenty of shopping, and fun things to do. North of the 183 highway, this part of the city encapsulates the outdoor shopping mall The Domain, the Rock Rose entertainment district, and the Arboretum neighborhoods. Many tech companies have planted roots here, which means remote workers will find plenty of satellite coworking spaces and tech-focused meetups and events, like Greenway Central. It tends to be a much quieter part of the city with larger homes built in the ‘70s that feature huge yards and trees —perfect for those with families. Or, for those who prefer walking home after a night out, there are also upscale condos or apartments available around the shopping and nightlife districts.

The Domain may feel slightly more upscale than the usual “Keep Austin Weird” vibes, and you’ll indeed see more Teslas in this neck of the woods than others, but there are also delicious eateries and fun watering holes that locals frequent, like Second Bar + Kitchen, Thai-Kun, Bakery Lorraine, Plank Seafood Provisions, and more. Even better: The Austin FC soccer team’s Q2 stadium is packed with local eateries and makes for an amazing place to spend the day cheering on the green team. In terms of shopping, North Austin boasts hundreds of retail stores ranging from the bargains to the upscale brands, like Louis Vuitton and David Yurman, plus local staples like Luxe Apothetique, Kendra Scott, and YETI. And when you need to get away to nature, Walnut Creek Park is also the perfect place to while away an afternoon under the trees.

Head south of the river to South Austin, where you can stroll all of the fabulous shops on SoCo (South Congress Ave.), take a pic at the “I love you so much,” mural on the side of Jo’s Coffee, or jump into the cooling waters of the Barton Springs Pool, which stays at a brisk 68 degrees Fahrenheit all year round. South Austin has retained much of its too-cool, laidback Austin attitude, and you’ll find plenty of casual eateries and easy-going people.

Travis Heights and Bouldin Creek are the most desirable neighborhoods to live in, given their proximity to awesome eats and cool coworking spaces, like Vuka and Fiber Cove (not to mention gorgeous homes!) but like most of Austin, you’ll also have to spend a lot of rent money to live here.

While South Congress Avenue is brimming full of tourists, locals also ramble up and down the street to favorites like June’s All Day and Summer House. It’s also the perfect part of town for a fun staycation with the hip South Congress Hotel, Hotel Magdalena, Hotel San Jose, Austin Motel, and Hotel Saint Cecilia, all of which have idyllic pools made for the scorching summer days. Don’t miss shows at C-Boy's Heart & Soul, and the honky tonk dance lessons at the legendary Broken Spoke on South Lamar are a must. For movie lovers, one of the best movie theaters in the country, the Alamo Drafthouse, which is famous for its Weird Wednesday and Terror Tuesday showcases, is also on South Lamar.

What people consider “central Austin'' is likely to change depending on who you ask. Loosely, Central Austin is South of 183 and North of 15th Street. It’s home to the gigantic University of Texas Austin (hook ‘em, horns!) and homes in Central Austin tend to vary from the austere and contemporary to 1950s Craftsmans. The neighborhood is brimming with people, including college kids renting with their roomies and young families with kids who love playing in the streets. The famous Hyde Park, Clarksville, and North Loop neighborhoods are also included in this part of town, all of which are noted for their rich history and lovely streets. Bear in mind, the neighborhoods in Central Austin can be pricey and many of the large lots have also been chopped in half and repurposed for multi-unit homes. Even if you wind up with less square footage than you thought, you’ll benefit from the fact that there are still plenty of lively patios to work remotely from in the area, including Quack’s, a bakery with cookies that shouldn’t be passed on, the coffee shop Epoch, and Uncle Nicky’s which really comes through when the lunchtime pasta craving hits.

Central Austin offers plenty to do, especially for foodies determined to try every good restaurant— Bufalina Pizza, Barley Swine, and Lick Ice Creams are all located within the same plaza on Burnet Road. There are several dive and cocktail bars to wet your whistle, including Barfly’s and The Tigress Pub, which is a great after-work spot across from The Commune coworking space on North Loop. For true Texas fun, you won’t find anywhere else, head to the famous Little Longhorn Saloon for Chicken Sh*t Bingo on Sundays. Every week, patrons place bets on where the chicken will…well, you can guess the rest. The game coincides with a huge tailgate party and the winner of the bingo gets a prize.

Given its central location, this part of town has easy access to almost the entire city and is a great place to bike to and from, including several coworking spaces on our list, including Vuka and Common Desk. At dusk, you’ll find plenty of joggers running the trails of Pease Park, as well as dogs roaming in the designated off-leash area. If you like cooking with fresh ingredients, H-E-B-owned Central Market is one of the best grocery stores in town.