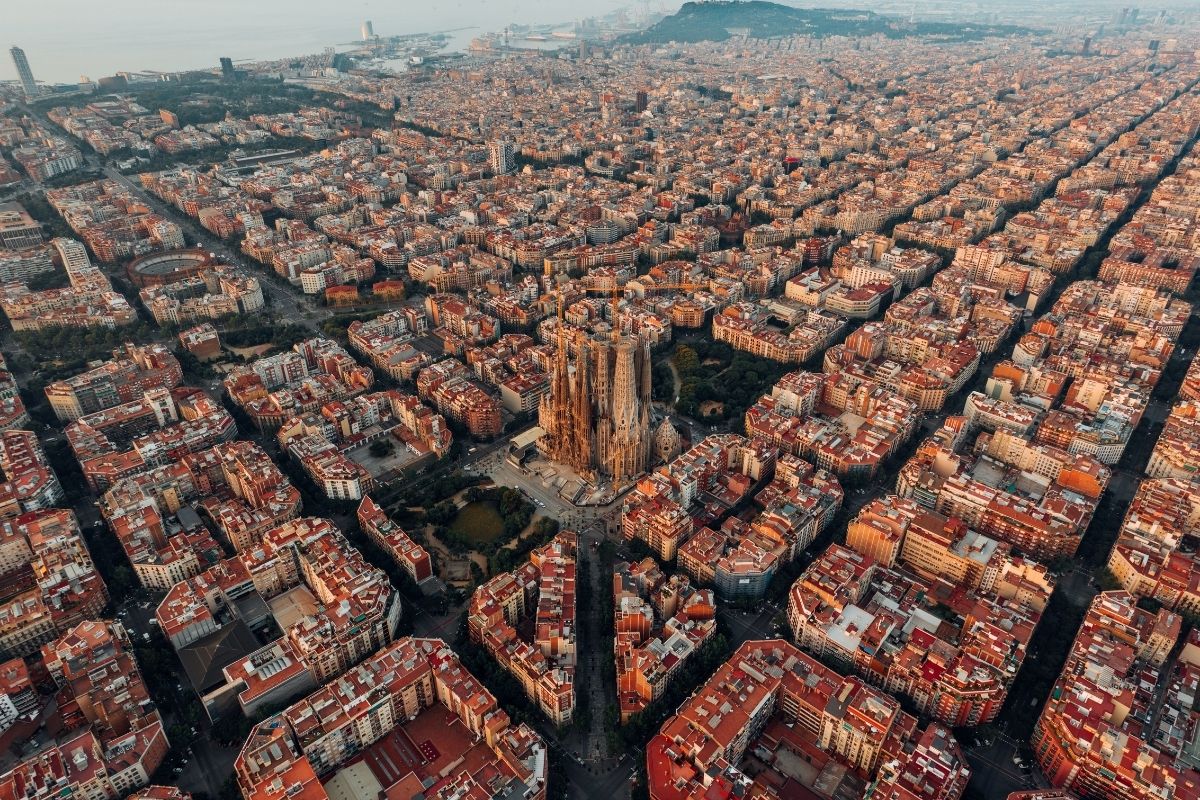 The Best Neighborhoods in Barcelona

Sam Harrison
ABOUT THE AUTHOR
Sam Harrison is a freelance writer who spent over four years living in Buenos Aires, and has written about the city for many different publications. She now lives in Barcelona, where she’s trying (and mostly failing) to learn Catalan.

Barcelona is a city known for its high quality of life and it has everything: beautiful beaches right in the city, hundreds of hiking paths that are accessible by public transport, fantastic food, and vibrant nightlife. For visitors, Barcelona is probably most famous for its incredible Modernist architecture and the works of Catalan architect Antoni Gaudi. But the city also has a thriving tech and startup scene, with nearly 2,000 startups across Catalonia. If you’re looking to work remotely, explore an exciting city with lots to see, and meet other digital nomads working on interesting projects, Barcelona could be the perfect city to call home for a while.

Barcelona is full of many neighborhoods, but the most famous is Cuitat Vella (the “Old City,” in Catalan), which covers the oldest part of the city. Here, you can still see ruins of the roman wall that circled the ancient city of “Barcino” in the Plaza de Ramon Berenguer. It’s the liveliest part of Barcelona, with the highest concentration of restaurants, bars, and cafés. It’s also the part of the city that attracts the most tourists. If you want to be where the action is, Cuitat Vella is a great option, but if you hate crowds, you might want to opt for a different barrio.

Today, Cuitat Vella is made up of four different neighborhoods, each with its own distinct vibe: Barceloneta, Raval, the Gothic Quarter and Sant Pere, Santa Caterina i la Ribera, which most people call Born. For more space, remote workers can look outside the oldest part of the city in more spacious and newly-buzzing neighborhoods like Poblenou, Gracia, and Eixample. Here are the best neighborhoods for remote workers to explore on an extended stay in beautiful Barcelona.

Barceloneta is a coastal section of the city stretches out towards the sea where you’re so close to the beach you can smell the salty air blowing off the Mediterranean. The neighborhood is a pleasant mix of old and new, with the W Hotel tower standing guard over the longest beaches in the city, Sant Sebastià and La Barceloneta.  This is the perfect neighborhood for people who like sunrise jogs on the beach or want to hit the waves as soon as their workday is done (what tiny waves the Mediterranean has to offer, at least). If you want to enjoy the water and avoid the crowds, you can rent a paddleboard (SUP), go on a boat tour, or take the port cable up to Montjuïc to get a different view of the city.

The neighborhood also has several seafood restaurants, like El Nou Ramonet and Salamanca, as well as fantastic tapas spots, including Bitacora and La Bombeta. In the summer, grab a drink and people watch at one of the many chiringuitos (beachside bars) that line the beach. Barceloneta has plenty of coworking options, such as Quartdenou, which is only a few hundred feet from the beach, as well as outposts from Monday and Utopicus.

The Gothic Quarter (Barri Gòtic, in Catalan), is the historic center of the city. Walking through the labyrinthine streets can give you a feel of what Barcelona was like hundreds of years ago, before the medieval wall that circled the city was torn down. There’s a lot to see and do in this area, from architectural sights like the Barcelona Cathedral and nearby Pont de Bisbe to the many bars and restaurants on the beautiful Plaça Reial to the shops on Portal de l'Àngel street, right below iconic Plaça Catalunya. Make sure you also take a stroll down the Ramblas–it’s usually crowded with tourists, but worth doing at least once. OneCoWork Catedral and Utopicus Plaça Catalunya are both good coworking options. For laptop-friendly cafés, try the Sandwichez on Carrer d’en Gignàs. Although it's lovely, the Gothic Quarter can become very crowded with tourists and can be noisy, especially in the summer season, which may be something to consider if you're looking to rent a long-term apartment.

Born is a trendy neighborhood that borders the Gothic Quarter and is known for its designer boutiques, cute shops, and great bar scene. Full of winding streets and narrow corridors, you never know what you're going to find on a wander through Born—one day it could be an artisanal coffee shop and the next it could be hidden courtyard bar. While you’re exploring, you can visit the Picasso Museum and grab some food at the Santa Caterina market. Don’t miss the Palau de la Musica Catalana, a colorful modernist masterpiece near Urquinaona metro station, or take a stroll through Cuitadella Park, on the opposite side of the neighborhood. The Antic Teatre is a great spot to grab a drink, and the Passeig del Born is lined with bars. Try legendary (but often busy) Cal Pep for seafood tapas or En Aparté for French small plates. Coworking spaces in the area include Aticco Urquinaona and MOB Caterina, though there are plenty of other options nearby. For cafés, try Citizen Café or Alsur, but know they restrict laptop hours on busy days.

Raval is one of Barcelona’s most exciting areas, with fantastic nightlife, thrift stores, and lots of great restaurants. It’s also sadly known for pickpocketing, muggings, and narcopisos (empty apartments occupied by drug dealers). It’s still worth exploring; just make sure to keep a watchful eye. You can grab a bite at La Boqueria market on the Rambla and then head to one of the many bars on Joaquin Costa street for a drink, or catch a movie at the Filmoteca. Many films are in Catalan, but they have showings in all languages. RavalCo is a good coworking space in the area, and Caravelle is a popular brunch place with WiFi, outlets, and lots of space.

Gràcia is a charming area known for its many plazas (perfect for grabbing a caña or a vermut), like Plaça del Sol, Plaça de la Vila de Gràcia, and if your legs feel up to tackling the hill, Plaça Lesseps. The neighborhood was a separate town until Barcelona annexed it in 1897—Passeig de Gràcia was built to connect the new barrio to the rest of the city—and it still has its own unique charm. The population is an interesting mix of older Catalan folks and internationals from all over the world.

Walk up Verdi to visit the cute clothing stores and bars that line the pedestrian street, and make sure to check out Casa Vicens, the very first house that architect Antonio Gaudi designed and built. In August, the Fiestas de Gràcia take over the barrio for five days: residents decorate their streets in different themes, and the whole city comes to celebrate and see the fantastical creations and hear different bands play. Gràcia has fantastic coworking options, from coworking spaces like  Betahaus and Garden Coworking to its many coffee shops, including Sandwichez (Bruniquer), gallery/bookstore/café Mecanic, Eat My Trip, Las Ikas, and Sabio Infante.

Poblenou has everything a digital nomad could want: it’s a lively area that’s close to the beach, with plenty of fantastic bars and restaurants. Razzmatazz, one of the city’s most famous nightclubs, is also in this area. The Rambla de Poblenou runs all the way up from Bogatell Beach up to Diagonal Avenue, and is lined with tons of restaurants, bars, and ice cream shops. Vegans should check out Blubar and Vrutal, almost directly across from each other on opposite sides of the Rambla. By contrast, nearby Can Recasens is known for its charcuterie platters, cheese, and great wine.

Poblenou used to be Barcelona’s industrial center, and the city rebranded it as “22@” and converted it into an innovation district. Many startups and tech businesses are located in Poblenou, so there are plenty of coworking spaces and techy people around. A couple of spaces to check out include WeWork and the beachy Maui Beach Coworking. Espai Joliu and its sister brand Orval are cute, plant-filled cafés popular with digital nomads.

Eixample is a large neighborhood traditionally divided into L'Esquerra de l'Eixample (“the left side of Eixample”) and Dreta de l'Eixample (the right side). Eixample literally means “expansion,” and was designed and built in the early 20th century. It’s known for its grid-pattern, long avenues, and the octagonal shape of each block–the architect who designed them predicted that 90-degree angles would make it harder for streetcars to turn. Barcelona chose to invest in subways instead, making the issue moot.

In Eixample, you’ll find several of the buildings designed by Gaudi, including the Sagrada Familia, famously still in construction after over 100 years, and the Casa Mila, nicknamed “La Pedrera” for its rippling stone facade. You’ll also see the “illa de la Discòrdia,” or block of discord, on Passeig de Gràcia. Five buildings designed by different Catalan Modernist architects, including Gaudi’s Casa Batlló, sit side by side on a single block. Finally, Eixample is also where you’ll find “gaixample,” a section of the city known for its many gay bars, nightclubs, restaurants, and gay-friendly hotels. For coworking spaces, try OneCoWork Plaça Catalunya. Galeria Cosmo, Nappucino Corner, Laie Libreria Café, and Satan’s Coffee Casa Bonay are all good coffee shops to check out.