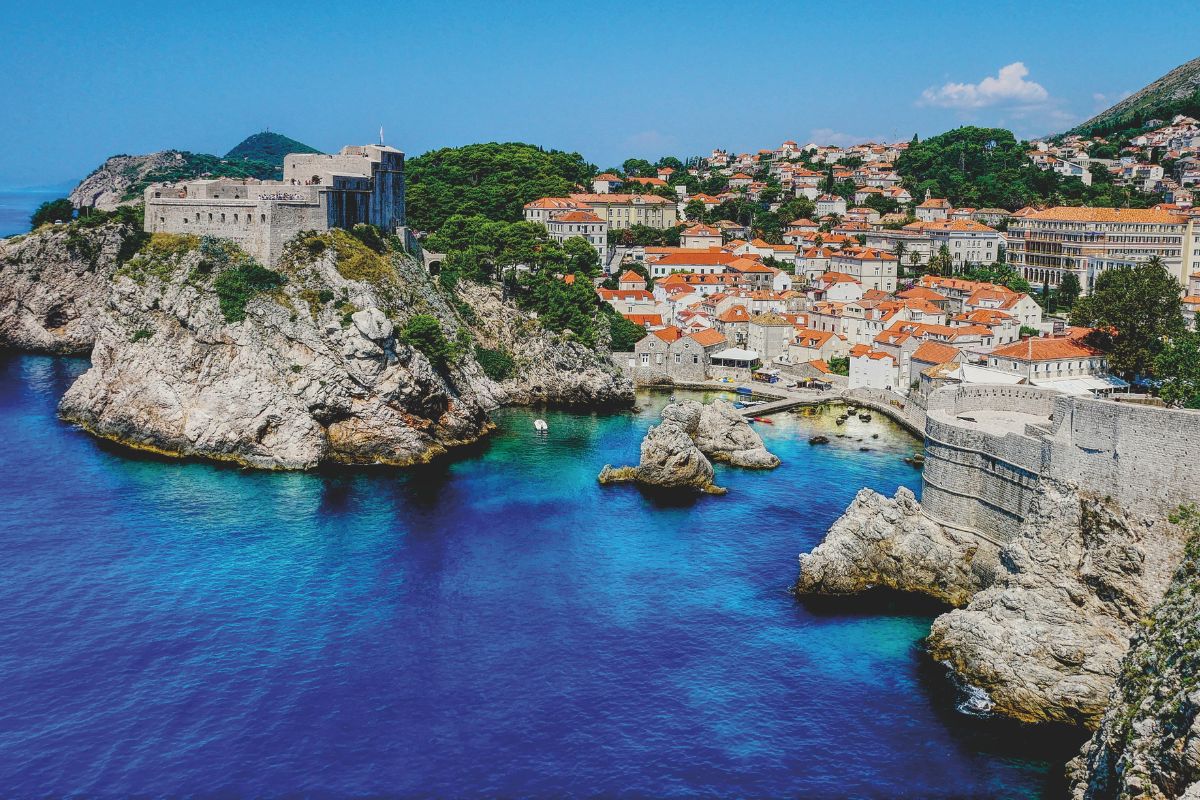 The Best Destinations in Croatia

Lucie Grace
ABOUT THE AUTHOR
Lucie Grace is a British freelance writer, based in Chiang Mai. She lived and worked remotely from Croatia in the summer of 2021 and 2022.

In Croatia, you’ll find the cultural crossroads where Central Europe meets the Balkans; a diverse natural landscape awash with mountains, rivers, waterfalls, beaches and seemingly endless islands; a riveting history that spans millennia. “Croatia is the land of magic and dreams” an elderly ice cream vendor once told me. He wasn’t wrong.

The former Yugoslavian state has seen huge changes in recent decades. Not that Croats weren’t accustomed to tourism—there’s been beach resorts on the coast since the 1800s and a visit to the eastern side of the Adriatic was the thing to do in the 1960s—but the growth spurt of popularity in the past 10 years has launched the country among the top ranks of Europe's tourism hotspots.

Put on the millennial map by famous television shows and movies that used the medieval towns along the coast as shooting locations, Croatia’s idyllic shoreline, which stretches the length of the country, is no longer a secret. From the vineyards and ancient villages of inland Istria, to the peaceful Kvarner Bay Islands, the wild national parks and waterfalls, forgotten ruins of Yugoslavian communist architecture, well-preserved Roman palaces, the sailing, the partying, the Dalmatian coast, and medieval fortified Dubrovnik, Croatia will keep you coming back for more year after year.

Currently not in the Schengen Zone, which blesses most passport holders with a 90-day stay regardless, Croatia was one of the first countries to launch a bonafide digital nomad visa in 2021. It’s relatively easy to access, requesting information on your income and / or savings and asking that you don’t work within the country. You can read the local blog Expat in Croatia for full details on how to apply. Consequently, it has been attracting nomads in droves since 2021and coworking spaces are a growing business.

Croatia is not a cheap place to live and rent prices spike in the peak summer months, particularly in popular destinations like Dubrovnik and Split, but you can find bargains in Fall and Spring as well as in the inland capital Zagreb, which is an elegant city not to be overlooked.

Darling of the Adriatic, this Croatian city is in a league of its own. Made famous by Game of Thrones, its walled, old town attracts legions of tourists and is surrounded by idyllic beaches just a stone's throw away from the marbled streets and baroque architecture. With a grandeur not dissimilar to Venice’s, it makes sense when you learn that Dubrovnik was an outpost of the Venetian Empire (between 1205 and 1358) before becoming an independent republic for 500 years.

Dubrovnik is best reached by ferry services from Split, as the border crossings in and out of Bosnia and Herzegovina can take a while (Bosnia and Herzegovina own a 20 kilometer stretch of coast that separates the eastern reaches of Croatia with the rest of the country). There are no official coworking spaces at the moment but Vibe Croatia organizes coworking events in the city three times a week throughout the summer, and there’s very likely to be some popping up soon, following the digital nomad conference held in Dubrovnik in early 2022. You can work in some cafes, but you'll have better luck trying the ones outside of the old town.

Lapad is the best neighborhood to live in for a more local vibe, or look into beachy Sveti Stefan to the east, if you prefer a quieter life. Opting to set up shop in the old town is expensive but great if you prefer to be amongst the mass tourism, which does subside at night once the cruise liners ship out. There are some excellent restaurants in all corners of town; the Michelin-recommended Proto Fish Restaurant, the affordable and tasty Lady Pi-Pi, grand Gradska Kavana down by the old town’s little harbor which often hosts coworking events, international vegan cuisine at Nishta, healthy and organic plates at Urban & Veggie, or elegant Pantarul in Lapad.

When in Dubrovnik, you’re flush with great things to do. Go kayaking around the lagoon. Take a boat trip to Lokrum or the Elafitski islands. Soar in the cable car that overlooks the city. Get away from the hubbub and hike to the spring that's the source of the River Dubrovačka and swim in the fresh cold water that runs into the sea. Nightlife is decent too, with Revelin Club leading the way, or for a laid back one find Buza Bar in the city wall, Soul Caffe & Rakhija Bar, Bakus Wine Bar, or Buzz Bar. Or you can always grab a few cans from Konzum market and sit by the harbor like the locals.

Music hub and student-centered maritime city Rijeka is often overlooked by tourists in favor of the Dalmatian coast, but the Kvarner Bay’s capital is full of surprises and surrounded by beaches, making it a great, cost-effective place to be based. With a history that goes back to the Neolithic period, a city was first established here by the Ancient Romans who made the most of the rivers, hills and port in their metropolis, Tarsattica. You can still find a Roman arch in the heart of the old town, an entrance gate which was once part of the ancient city’s wall.

The city center is a buzzy but comparatively laid back hub, laden with Austro-Hungarian Hapsburg architecture that give an elegance to what is essentially Croatia’s largest free port. Full of cafes, independent retailers, quirky museums and excellent restaurants, Rijeka is an enjoyable place to live week to week, and very well connected to the beautiful islands nearby such as Krk, Cres and Lošinj, which you’ll likely want to explore on weekends.

There are two great spaces for coworking; Klub Mladih which is in essence a youth club for students but has all the facilities you’ll need and is a great place for meeting people either day or night. Similarly student and graduate focused RiHub is a cultural center with excellent meeting rooms and workspaces. If you’re happy working away in cafes, the aptly named Book Caffe is a top choice or try King’s Caffe which has a great food menu, solid WiFi, and a few plugs for staying charged.

As with any student town around the world, Rijeka has a vibrant live music scene, but what makes it special is the Yu-Rock (Yugoslavian Rock) heritage, being the birthplace of many of the biggest acts of the 80s and 90s that the Balkans saw. Klub Mladih, RiHub and Book Caffe all host gigs and there’s Ri Rock festival every winter, showcasing this legacy, and promoting new bands.

There’s some great dining in town; Seafood restaurant Feral is brimming with personality and the fresh catch of the day, Konoba Tarsa up in scenic neighborhood Trsat serves the best of traditional Croatian cuisine and if you’re going for fancy, the Michelin-listed Nebo Restaurant up in the relatively new and very swish new Hilton, does incredible tasting plates that are themed are the geography of the country.

Popular beauty Split is much more than just a gateway to the Dalmatian islands. With a vibrant, youthful energy that pleasantly juxtaposes the Ancient Roman town center, here is a city where the very old meets the very fun. Whether you stay for days or months, you’ll just as likely be invited to a beach party as an opening in a museum. This is Split’s charm. Coupled with brilliant cafes and some outstanding restaurants, it’s easy to see why so many nomads stop here.

The 4th century-era Diocletian's Palace makes up the bulk of the old town and the marble-paved streets are pretty packed with tourists all summer long, but it’s a big enough city to avoid them and get into your own routine of remote work life. You’ll likely want to live outside of the old town in one of the laid back local neighborhoods like the beachy Firule, forested Varoš, or harborside Bačvice, all comfortably distanced from the day-trippers.

Coworking is plentiful in Split, led by veteran space in town The Works who are often at capacity these days due to their popularity—so best become a monthly member. Long serving heroes Saltwater Nomads sometimes temporarily close their Split workspace while they run nomad conferences, so check their website before visiting. The folks at Scaleup are providing very solid, functional spaces and new kids Smartspace are thriving, with hip, well designed spaces designed with nomads in mind.

The city is blessed with a plethora of top cafes to hang out or work in. Nomads love Cookie Lab for its incredible pastries, coffee, and staff. D16 speciality coffee roasters are a light and airy space who are happy to let you work away on your laptop. The Daltonist is another great option—it’s not quiet but the breakfast, lunch, and dinner menus are all showstoppers, plus staff and facilities are fab, so you’ll find lots of people working there.

There’s so much to do in Split. The beaches and nightlife are enough to keep you busy for weeks but if you’re culturally inclined there are also some excellent museums and galleries that range from the weird (Froggyland) to the wonderful (Museum of Fine Art). Take the Split Food Tour to get orientated but once you’re settled, truly fantastic restaurants await you; Michelin listed Šug, posh yet vibrant Kinoteka, neapolitan Pizzeria Bokamorra, vegan Pandora Greenbox, veggie friendly Bepa! or local seafood Konoba Matejuska are just a few of the culinary delights in town.

Croatia’s capital is one of the most laid back cities in Europe. A leafy, genteel place full of wide roads, parks, gardens and Austro-Hungarian buildings, the smooth running metropolis is an enjoyable place to live, in very close proximity to the surrounding mountains and lakes while maintaining an exciting nightlife and buzz of activity. It’s also one of the cheapest places in Croatia to base yourself, unusual for a capital city, as most tourists make a beeline for the beach, so you can find reasonable deals on lettings and accommodation, with everything you need on your doorstep. One thing to note is it gets very hot in the summer, so most locals ship out in August and head to the breezy coastline, so this month is comparatively quiet.

As you’d expect from a capital city, it’s the business hub of the nation so coworking spaces are plentiful. You can get good monthly rates at InstantOffice Zagreb, HUB385, HUB Gacka16, BIZkoshnica, Element Int, ZICER – Zagreb Innovation Centre, and SquareOne coworking, all of which have fantastic facilities and are very well managed. If you prefer to work in cafes you’re equally as well catered for with bright airy Botaničar, literary Booksa, music hub KIC Klub, coffee roasting Quahwa, Cognito chain’s outpost Café u Dvoristu, courtyard Domenico, vibey Hub Cooltura Pub, pastry heaven Korica, and coffee heaven Karibu Kaaawa all being accustomed to having nomads come by.

Dining-wise, you’re spoiled for choice because Zagreb has the most Michelin-listed restaurants in Croatia. Tou can dive in to the fine dining Dubravkin Put, or try the tasting plates at Pod Zidom Bistro. Local favorite Stari Fijaker is also unmissable, serving traditional Croatian cuisine in a very quaint environment with excellent service or for something less meat heavy, veggies paradise Zrno bio bistro has got you covered.