The Best Neighborhoods in Miami Beach 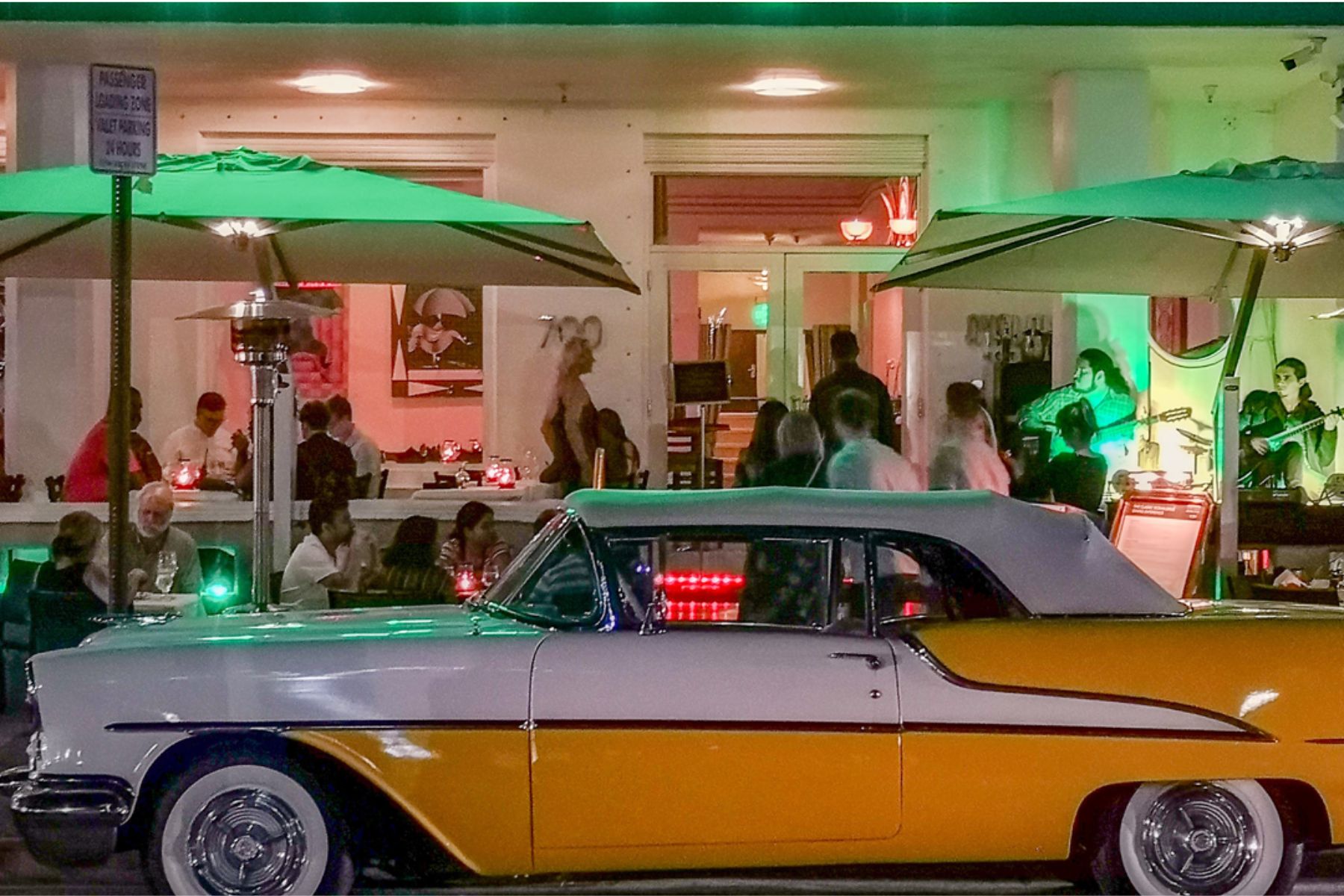 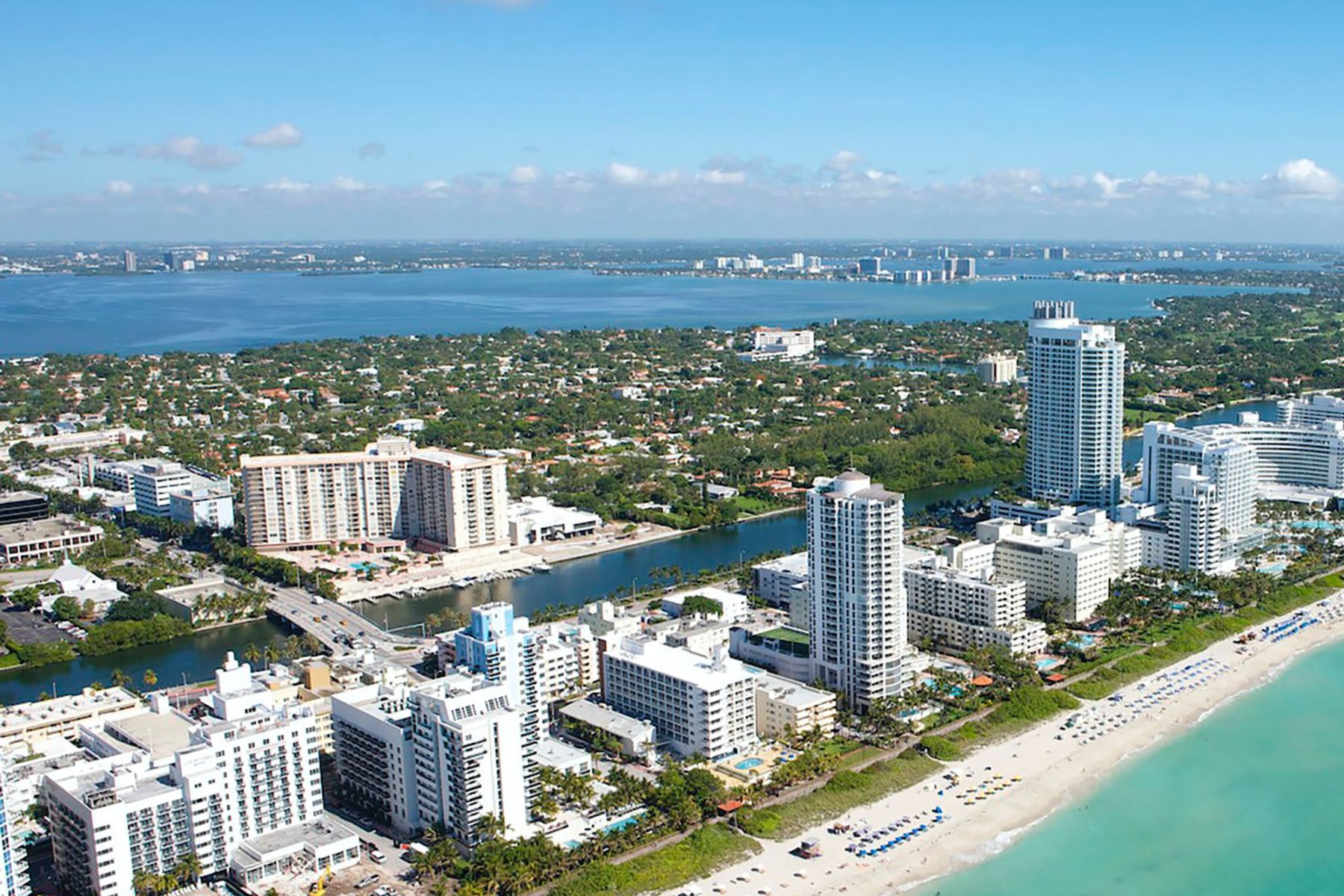 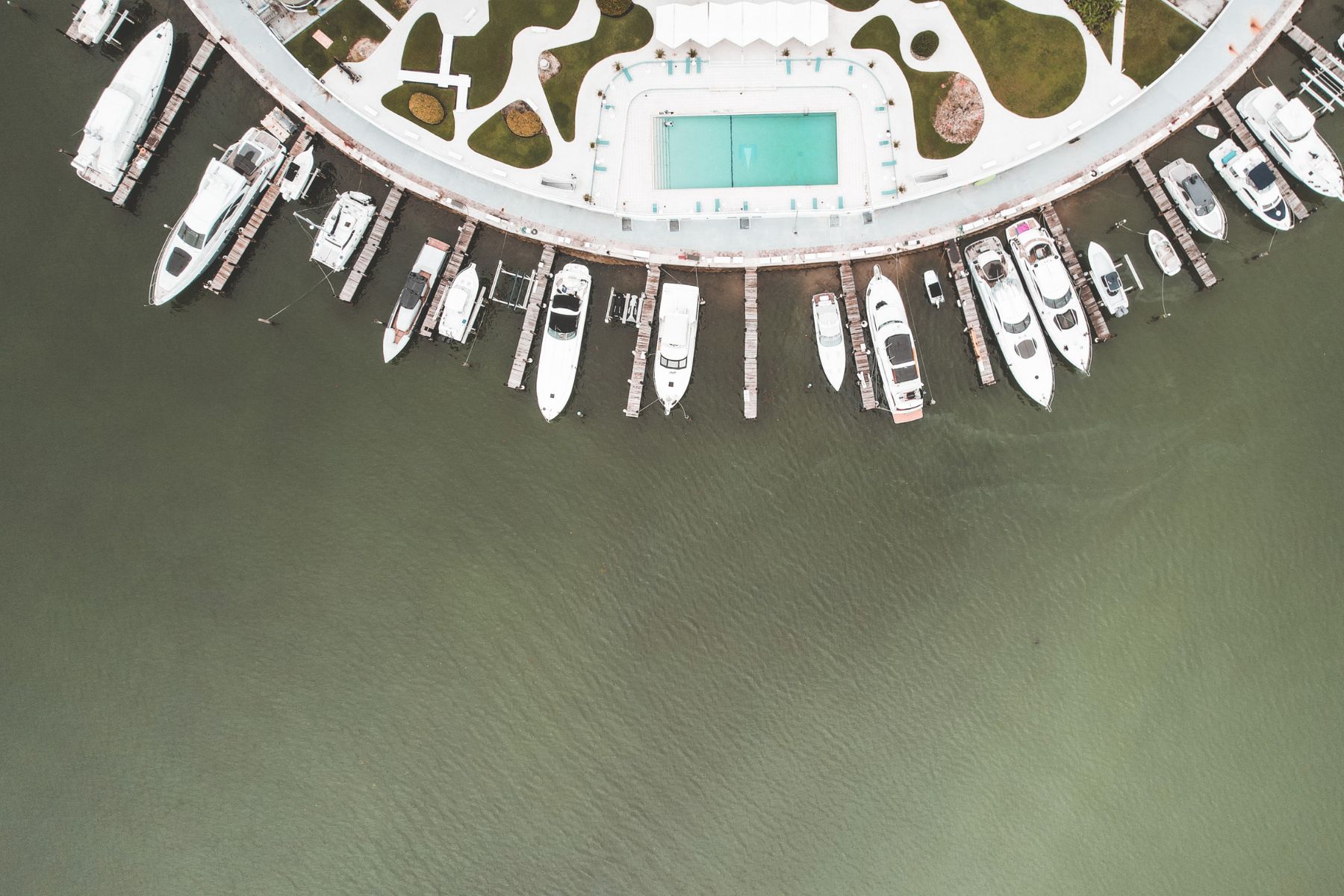 When most people talk about Miami, they’re probably referring to Miami Beach, a nine-mile-long barrier island along the Atlantic that sits parallel to the coast. The Venetian and MacArthur Causeways stretch across the bay connecting Miami Beach with the mainland, and from the bridges, you’ll catch picture-perfect skyline shots.

Once you make your way over the water, Miami Beach unfolds into three neighborhoods: South Beach, which extends from South Pointe Park north to 23rd Street; Mid Beach, which runs from 24th to 60th Streets; and North Beach, which extends from 60th Street to the town of Surfside. While the lines between the sandwiched neighborhoods can sometimes blur, they each have their own defining features and offer everything from the famous restaurants and beach clubs that give Miami its reputation as a top vacation destination to history, culture, and cafes serving up locally roasted coffee and an atmosphere ideal for working remotely. 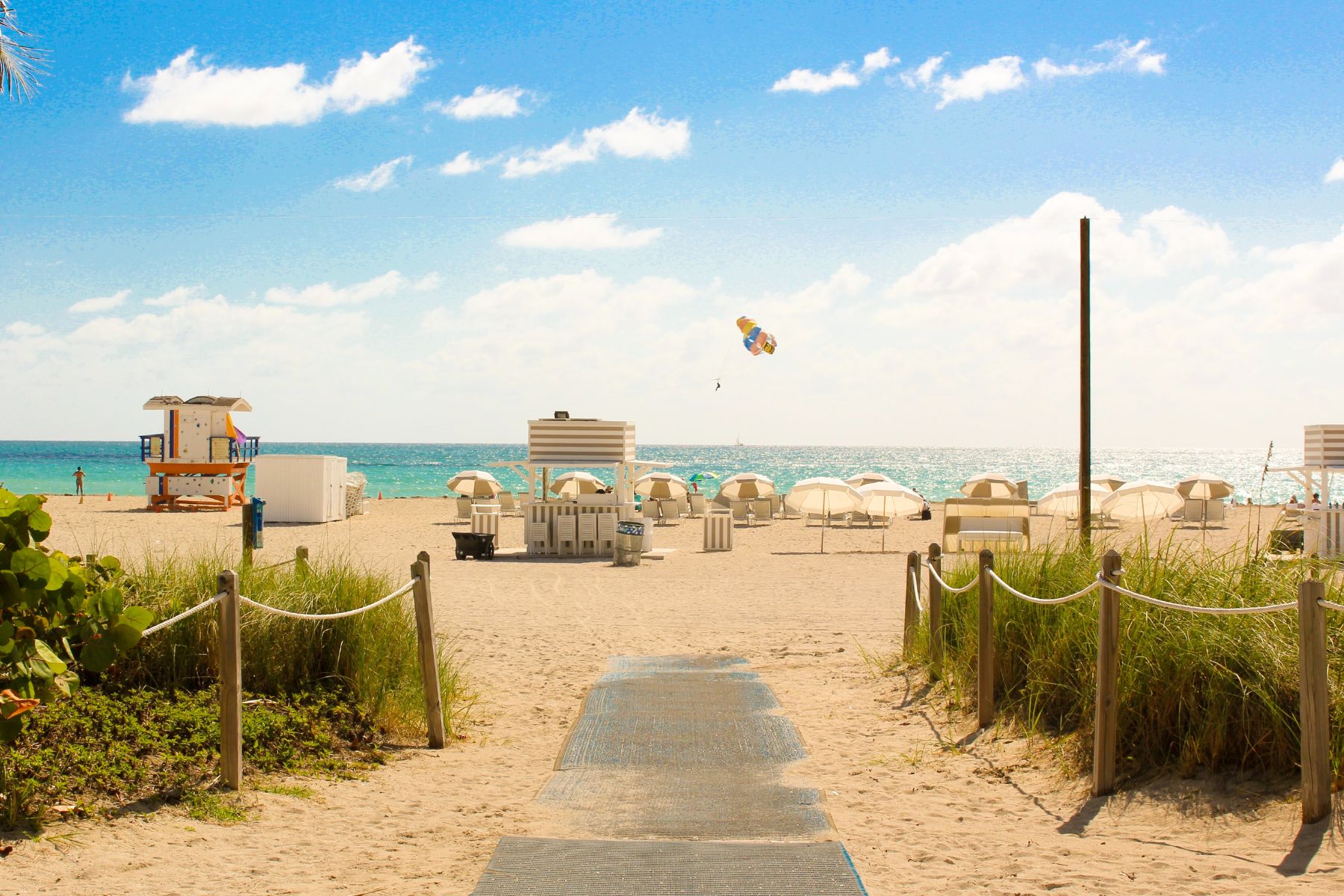 Text Link
South Beach
South Beach packs quite a punch in terms of attractions considering it’s such a narrow strip of land. The tip of Miami Beach starts at South Pointe Park, where you’ll find picture-perfect shots of South Beach’s coastline, as well as Downtown Miami... 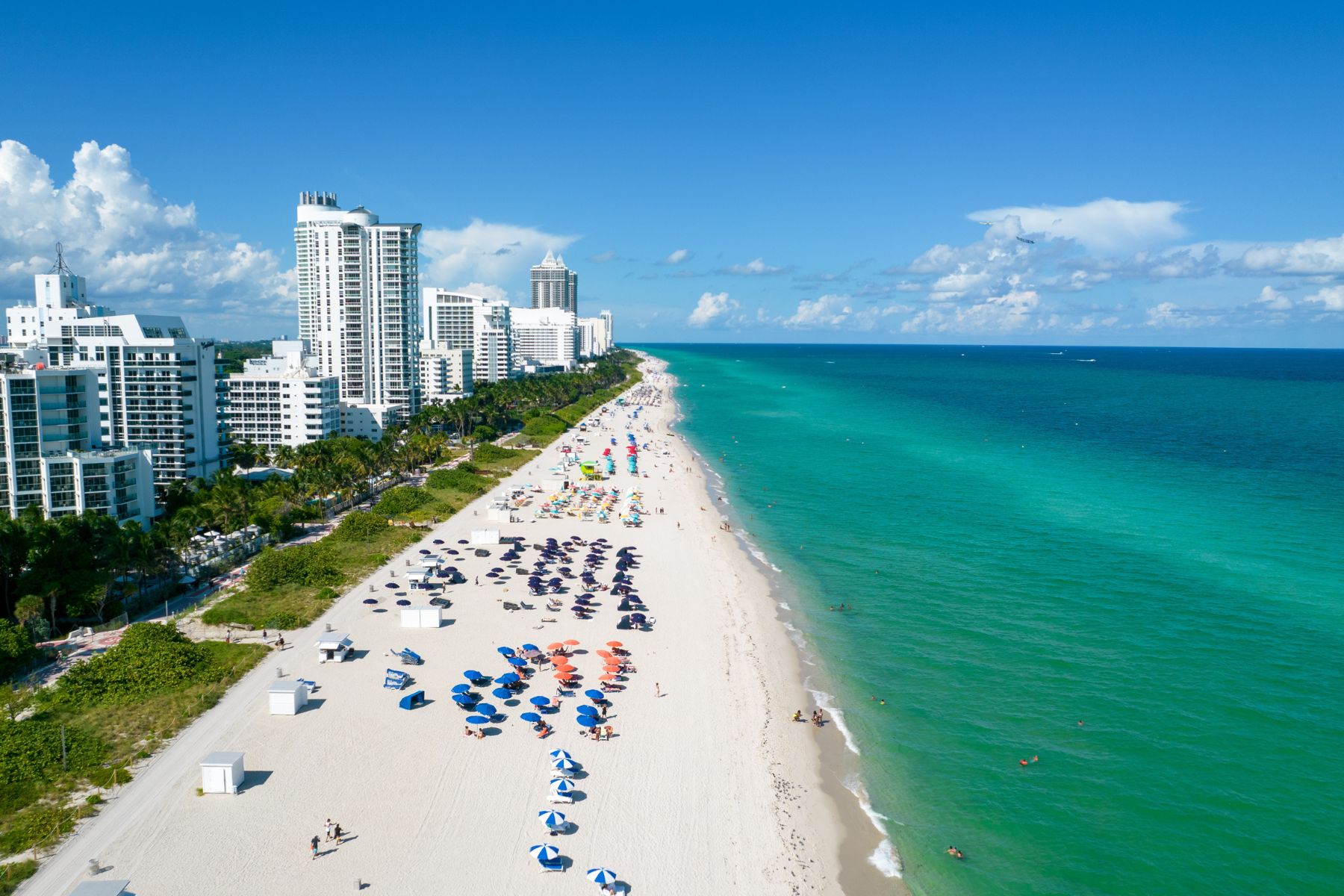 Text Link
Mid Beach
The 1954 Fontainebleau Miami Beach was, up until the last decade or so, one of the defining features of Mid Beach, the neighborhood tucked between South and North Beach. The iconic, Morris Lapidus-desig... 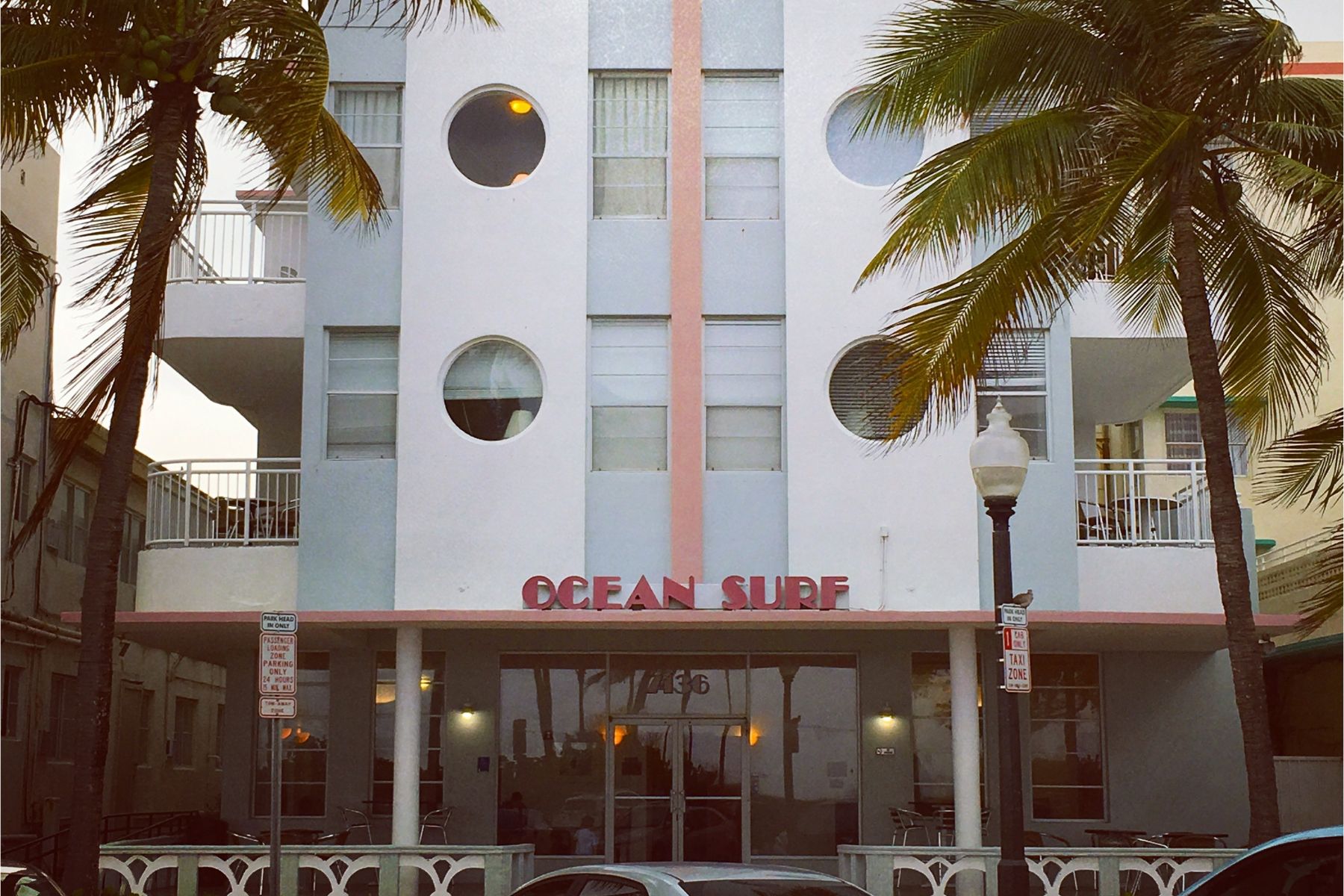 Text Link
North Beach
If you’re looking to be close to the Miami Beach buzz but want something on the quieter side, North Beach is a residential, family-friendly option. The neighborhood is much more laid-back than the rest of Miami Beach, and even the architecture is ... 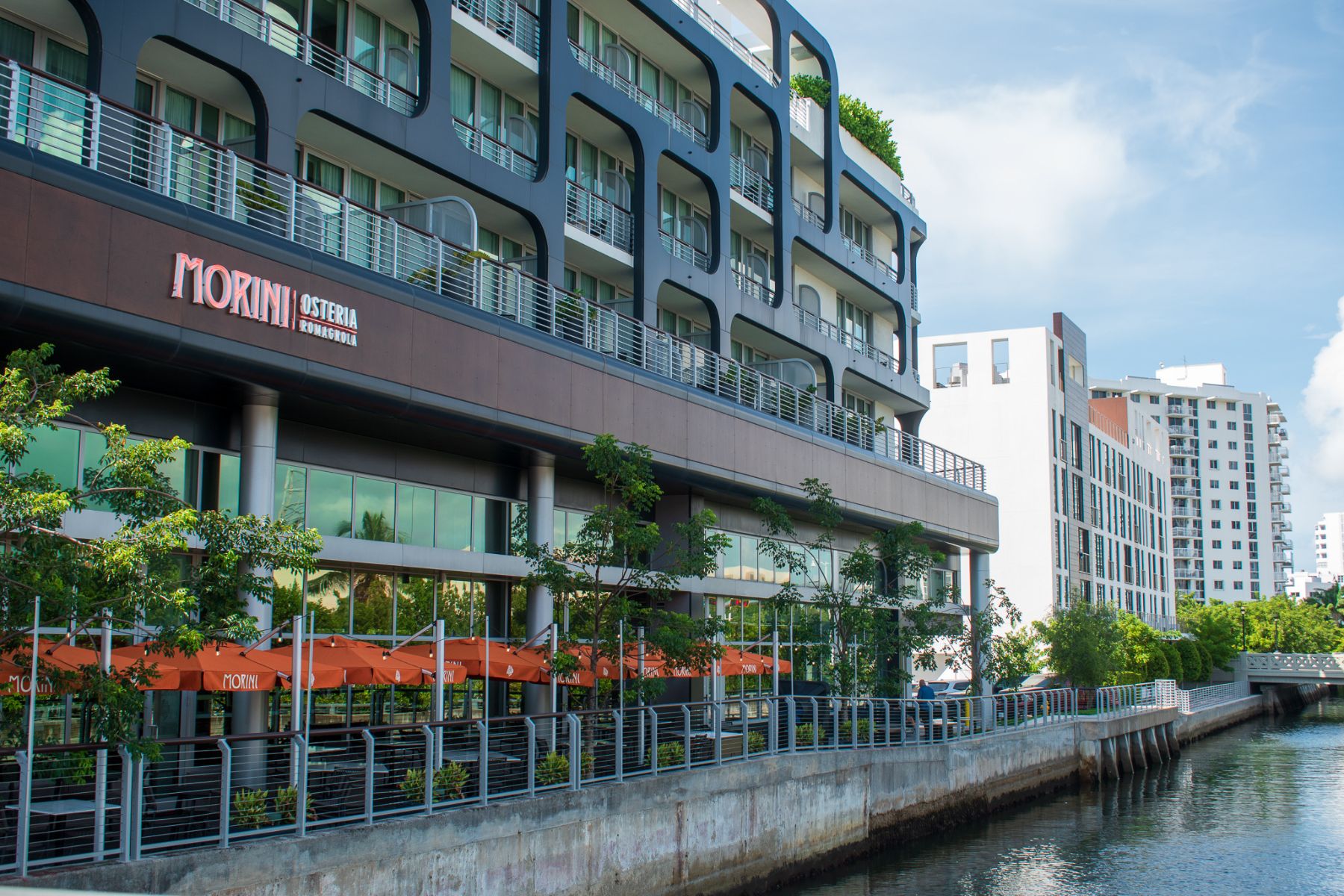 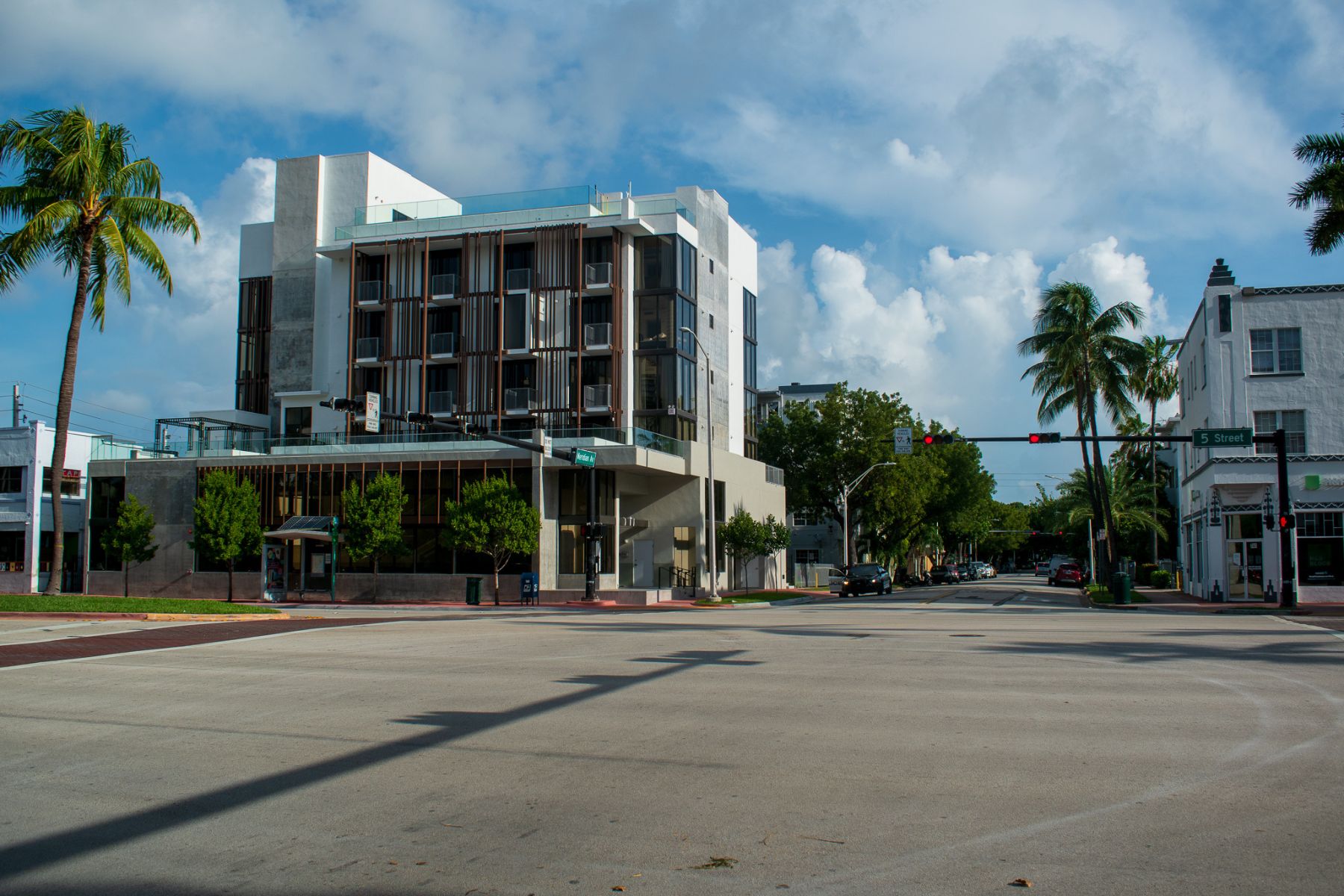 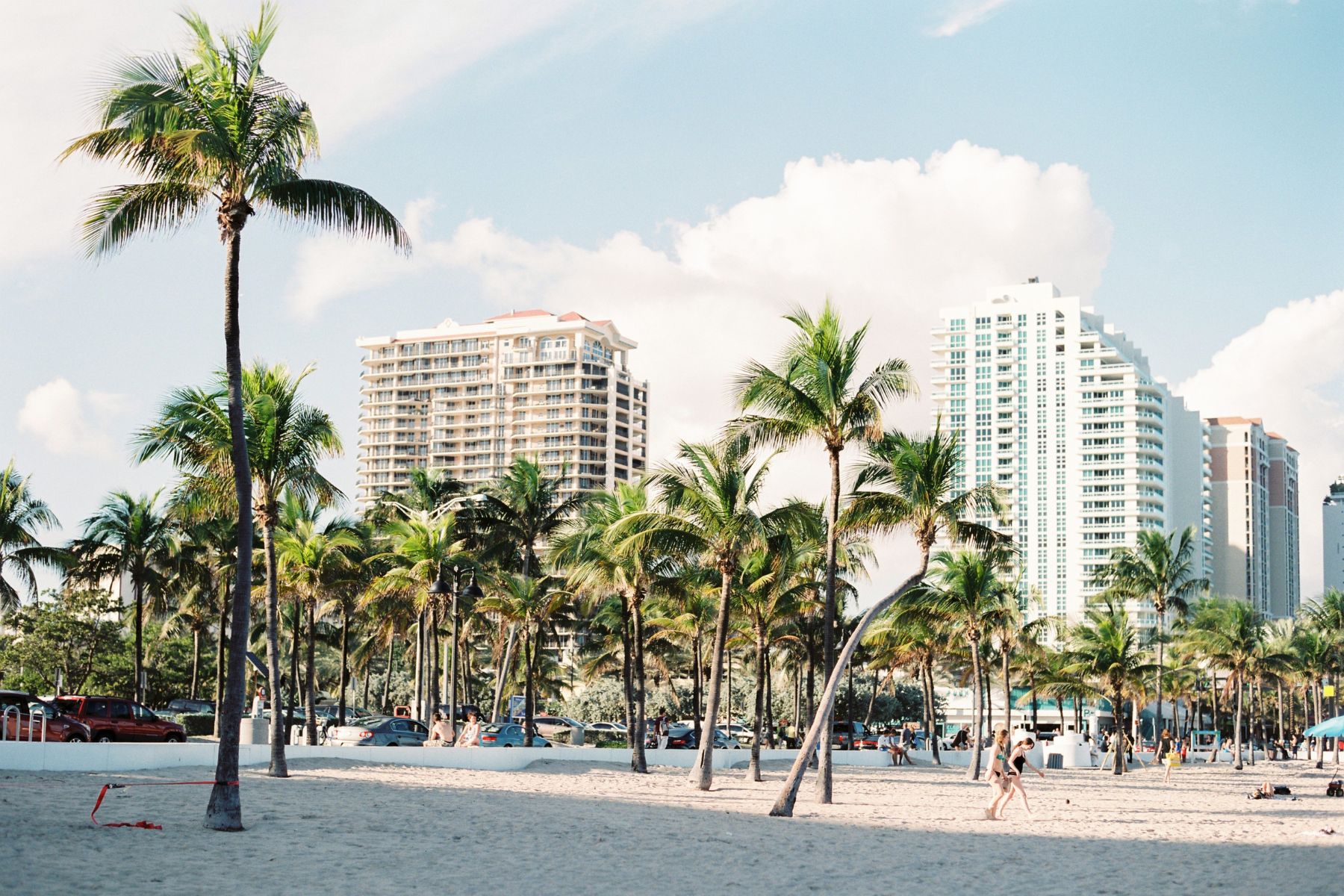 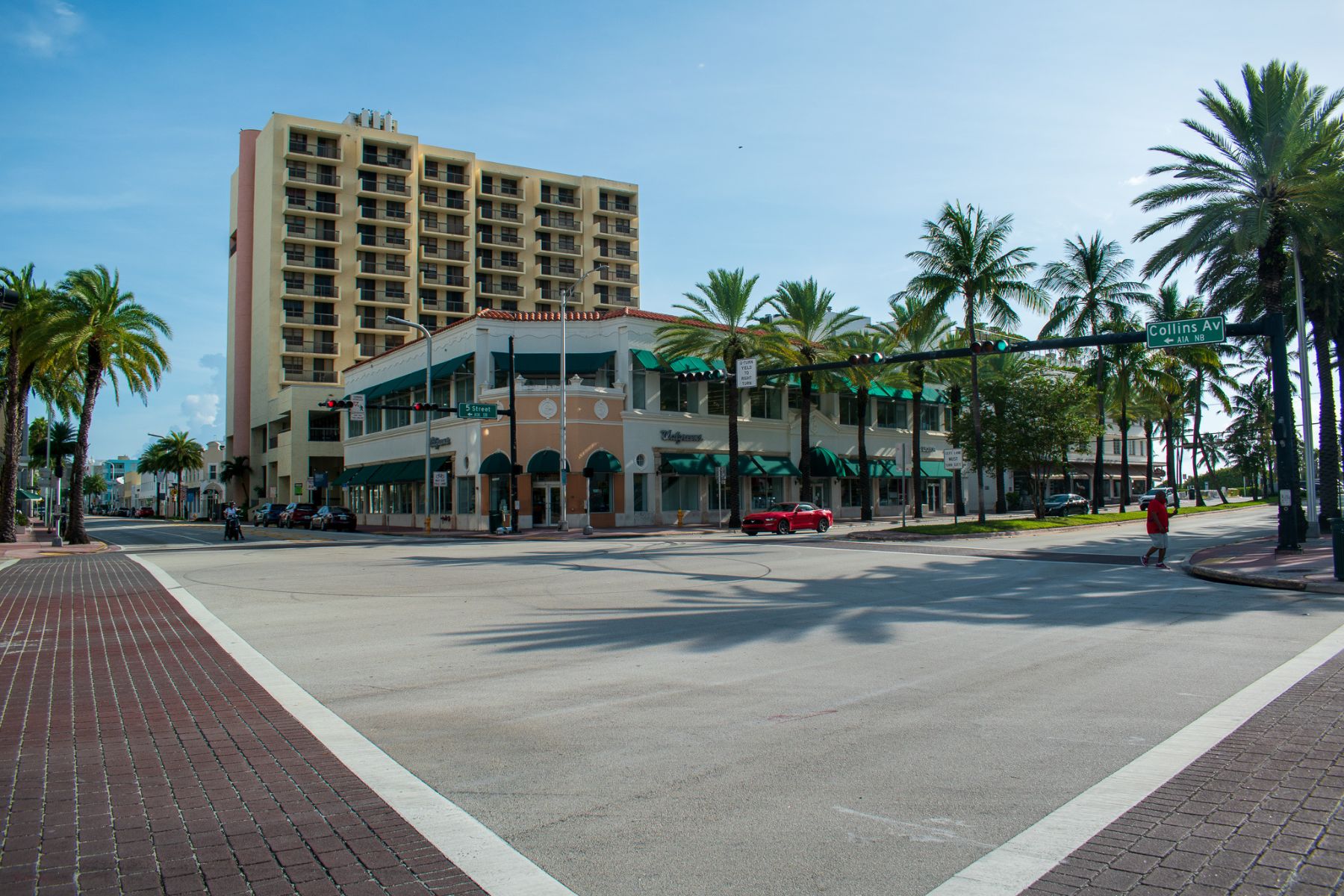 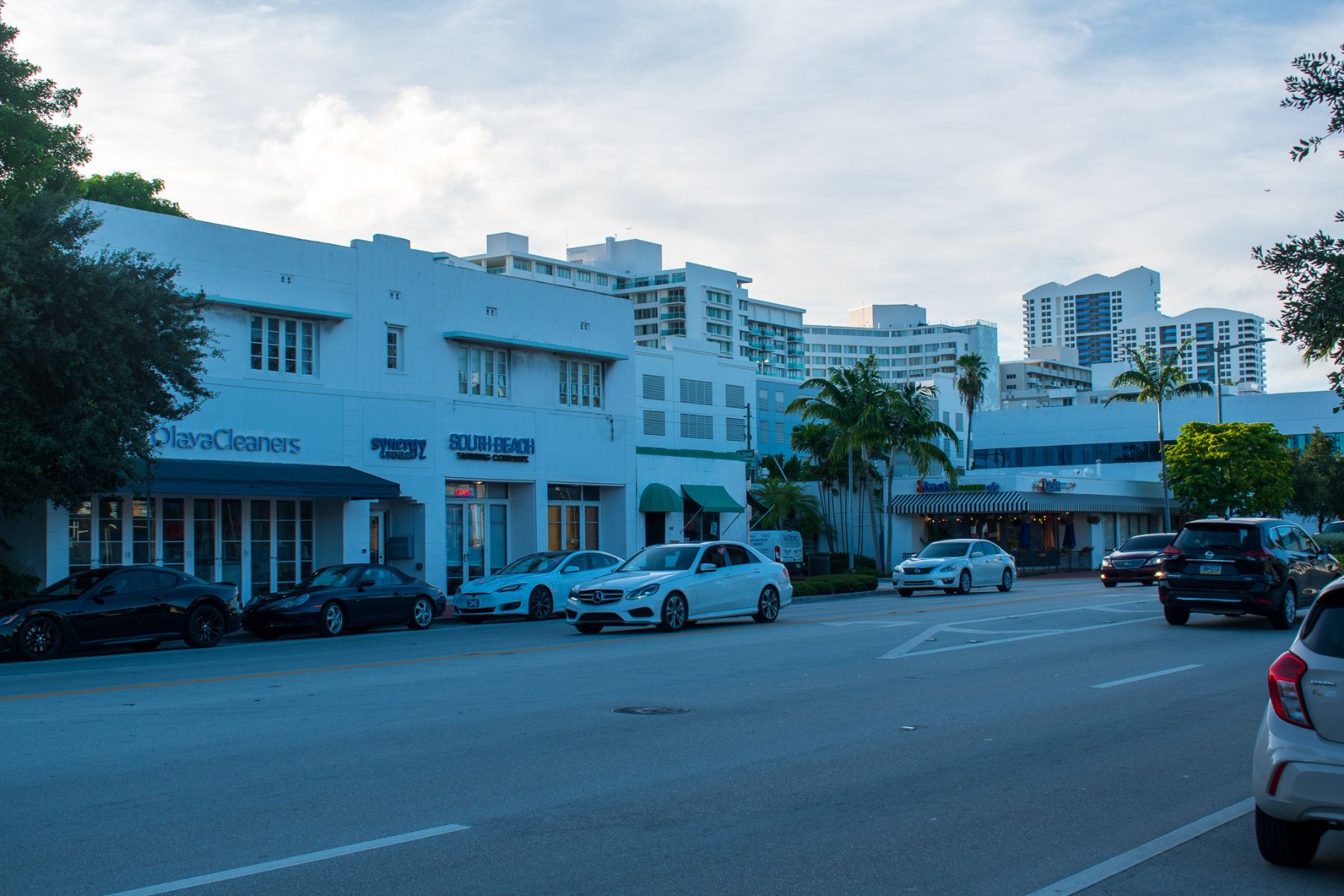 South Beach packs quite a punch in terms of attractions considering it’s such a narrow strip of land. The tip of Miami Beach starts at South Pointe Park, where you’ll find picture-perfect shots of South Beach’s coastline, as well as Downtown Miami’s skyline and the cruise ships lined up in PortMiami. In addition to a dog park, plenty of picnic and barbecue areas, and walking trails, the park also features one of the city’s most lauded steakhouses, Smith & Wollensky. Heading north, the neighborhood offers a string of buzzy restaurants and bars in the South of Fifth area (nicknamed SoFi), which has a more upscale, local feel than some of its tourist-trodden neighbors like Lincoln Road. Here, you’ll find world-class tasting menu restaurants like Top Chef winner Jeremy Ford’s Stubborn Seed and see-and-be-seen Italian-American eatery Carbone, as well as a WeWork with communal tables and desks.

Nearby, Sunset Harbour is home to a mix of boutiques, yoga and fitness studios, juice bars, and standout eateries like Sushi Garage and chef Cesar Zapata’s Cajun-influenced Vietnamese eatery Phuc Yea. This area draws a younger crowd who spend the day going from a workout to coffee, coworking at Panther or Büro, and dinner, but it’s also popular for paddleboarding since it sits on the bay and shows off fantastic views of the city’s skyline at sunset.

Tourists frequent strips like Lincoln Road and Española Way, but don’t discredit these historic landmarks—there are a few hidden gems like Tropezón, an Andalusian gin and tapas bar, and Juvia, a trendy French-Japanese-Peruvian eatery that crowns the rooftop of the 1111 Lincoln Road garage, which also houses coworking spot Spaces.

You’ll come across more options for traditional and casual coworking spaces scattered across South Beach, but this is the beating heart of the barrier island, meaning it’s similar to New York and never really sleeps. Traffic can be at a standstill and main drags like Collins Avenue or Ocean Drive, despite the charm of the Art Deco buildings and iconic neon signs, can sometimes be rowdy and attract a party-focused crowd. Prices cater to the tourist market, and many restaurants, bars, and even spas will automatically add gratuity to the check. However, South Beach also attracts a young, local market who like the walkability factor and accessibility to such a varied mix of cultural and entertainment attractions sitting just steps from the beach. 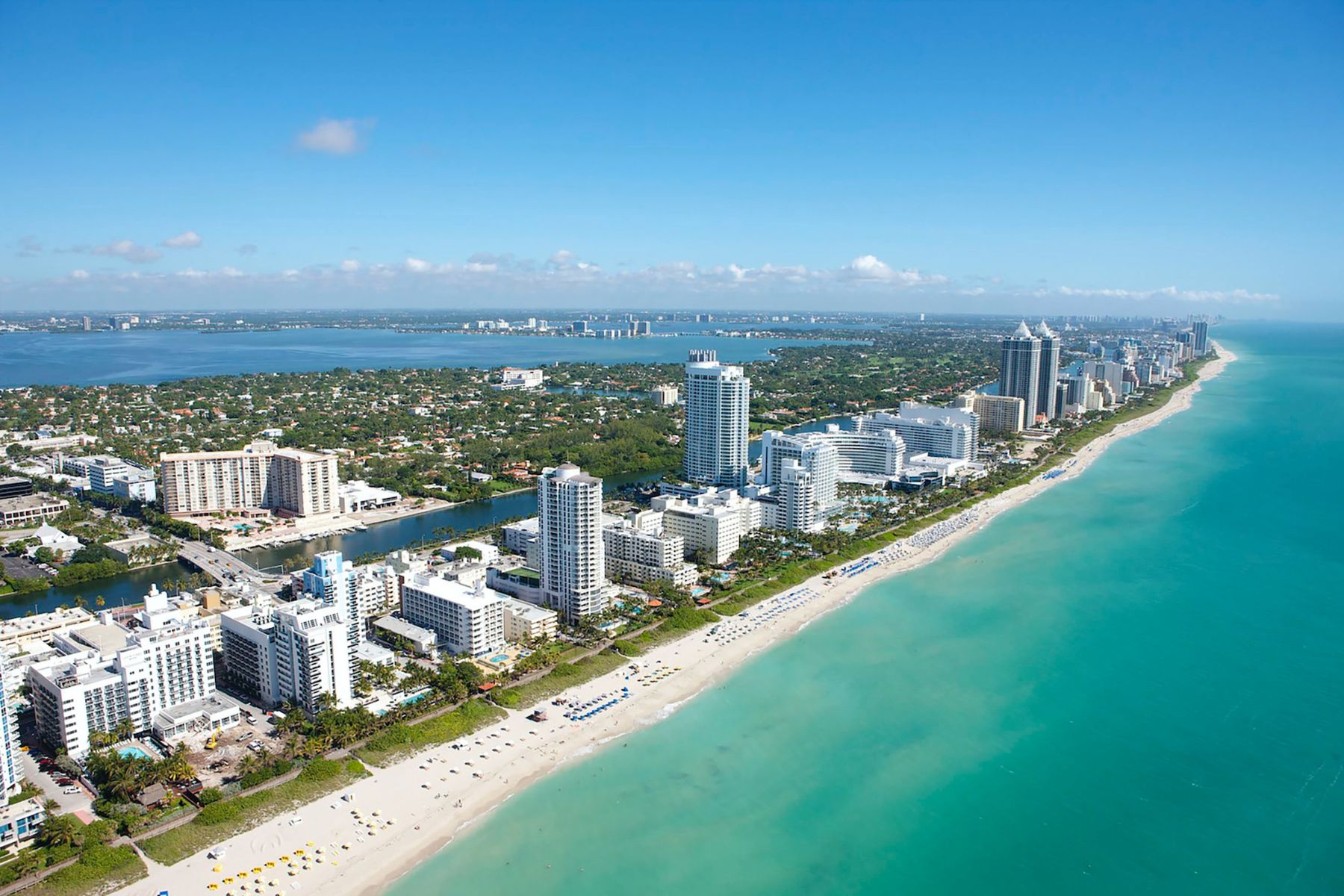 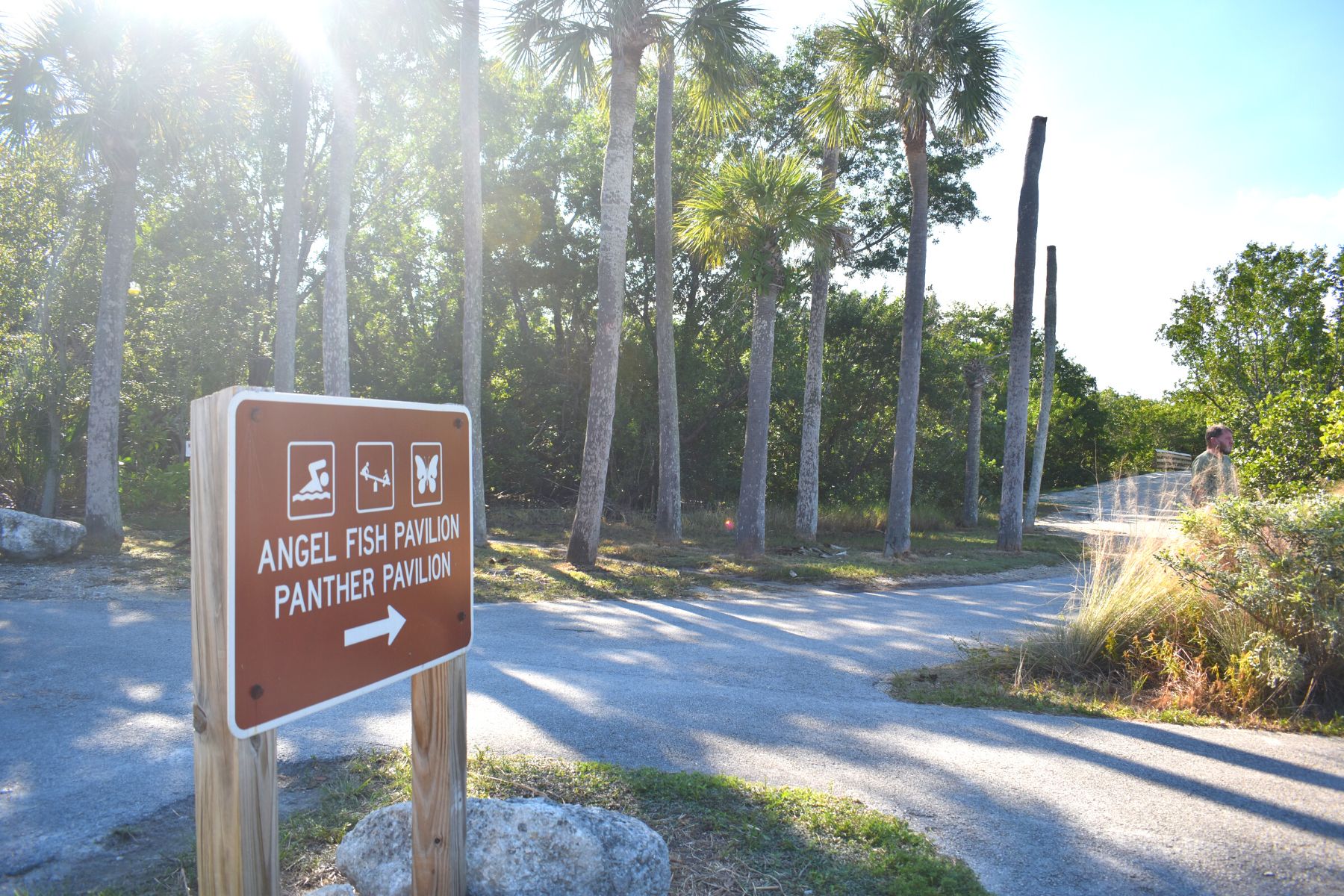 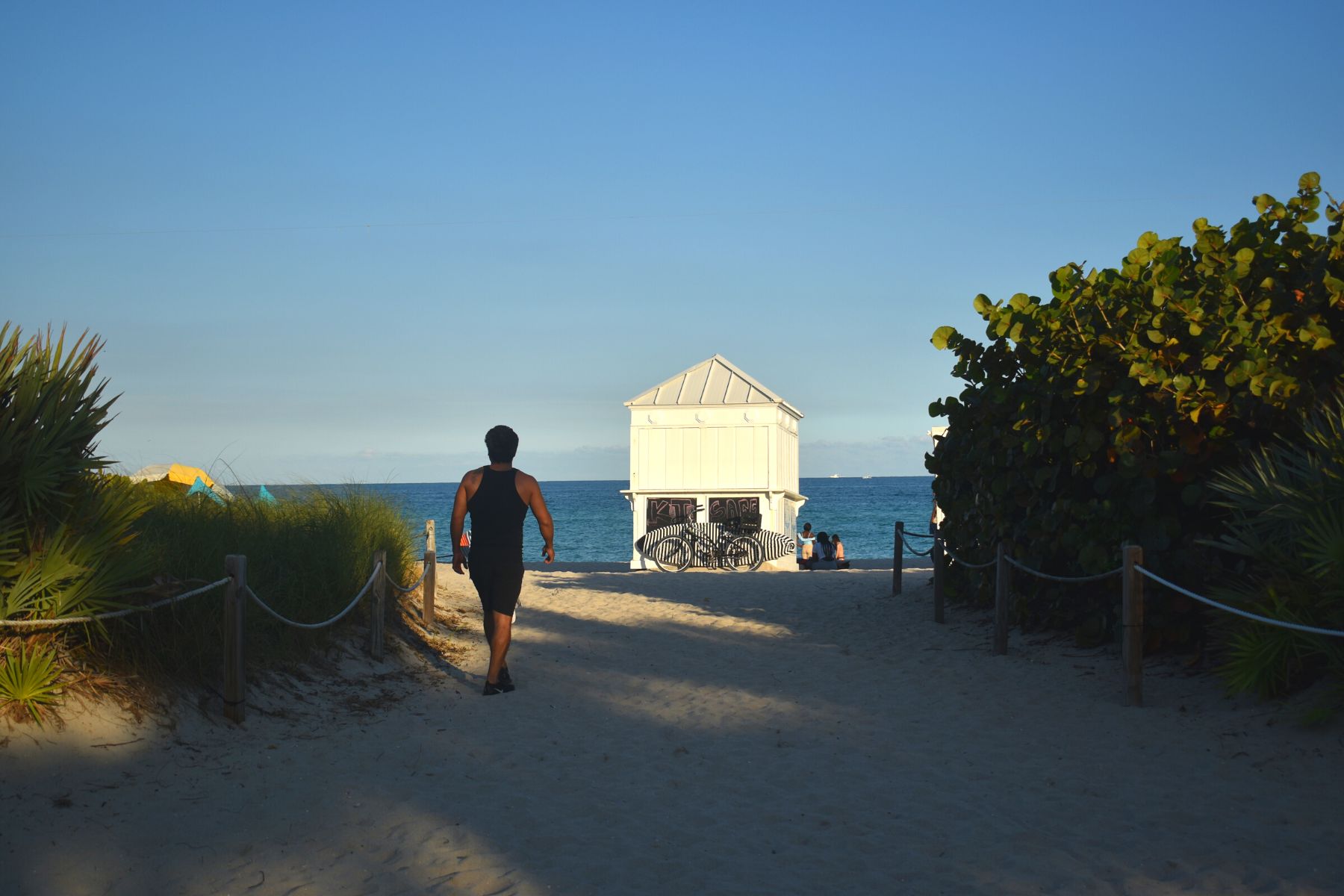 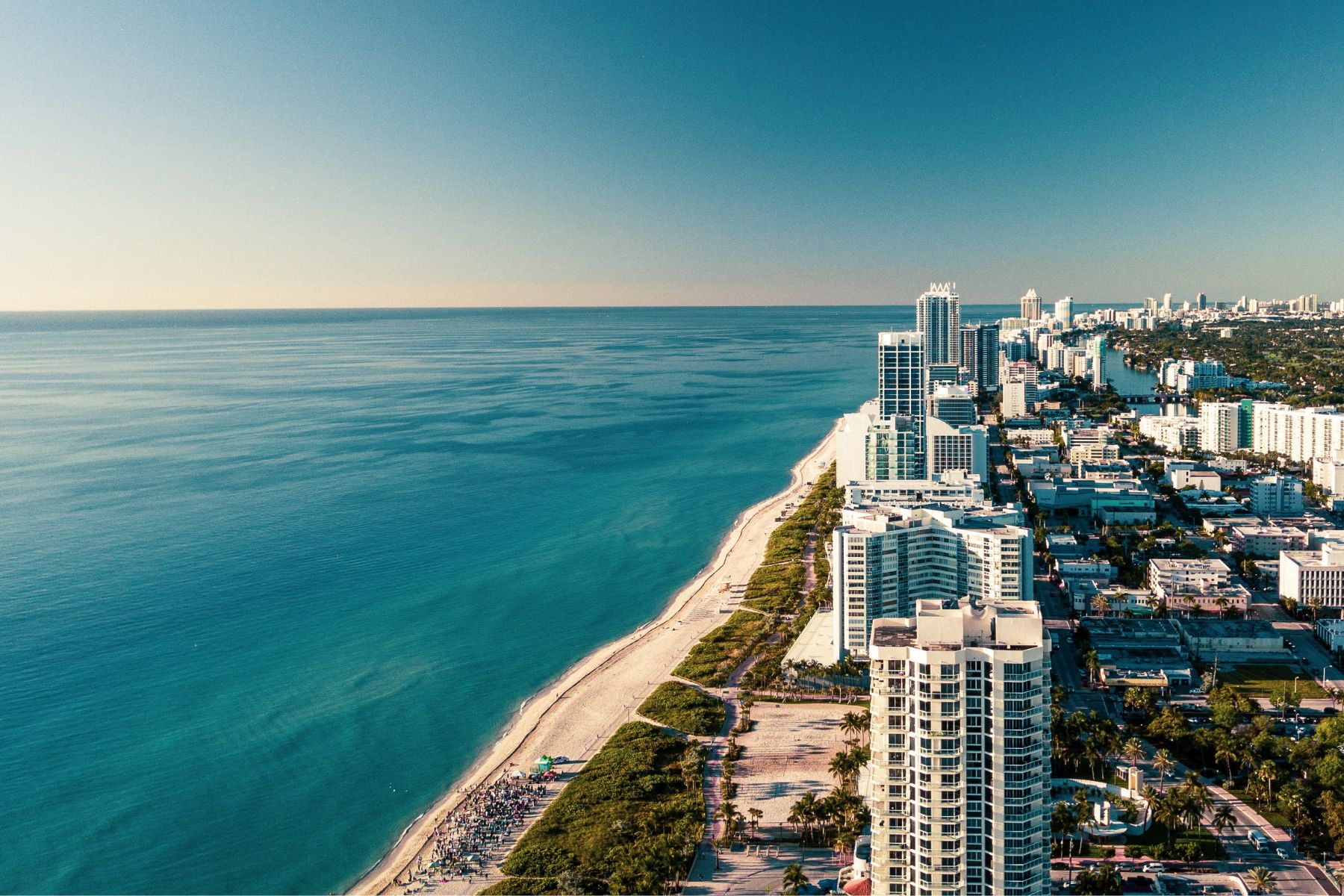 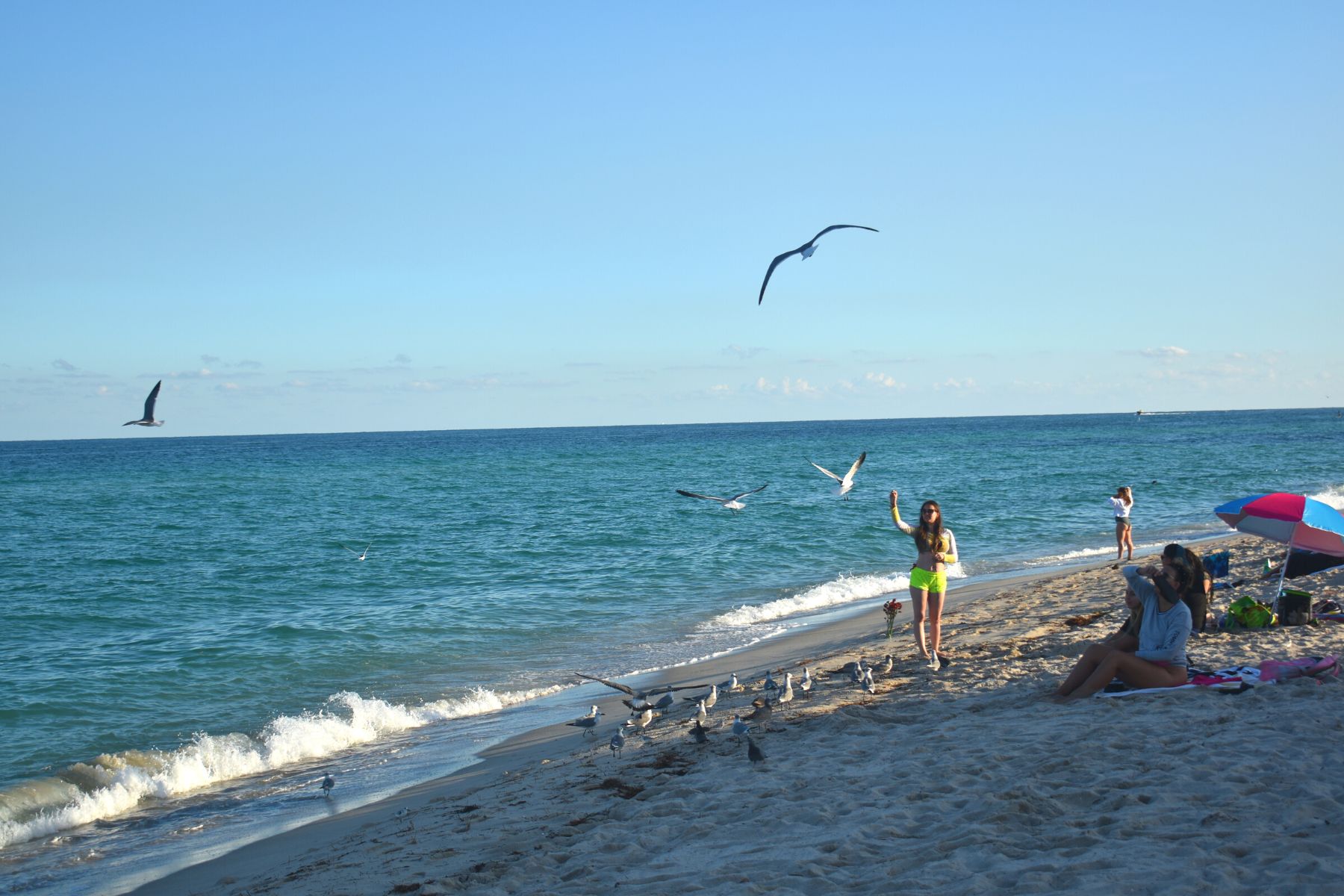 The 1954 Fontainebleau Miami Beach was, up until the last decade or so, one of the defining features of Mid Beach, the neighborhood tucked between South and North Beach. The iconic, Morris Lapidus-designed hotel was where the Rat Pack once held court and is now home to award-winning eateries like Scarpetta by Scott Conant and StripSteak by Michael Mina. This is also the beating heart of Mid Beach’s nightlife thanks to LIV, a celebrity-filled nightclub that calls DJs like Tiesto regulars.

Mid-century modern beauties like Eden Roc Miami Beach Resort, another former Old Hollywood playground, have been joined by a mix of buzzy hotels and bars like the beachfront Miami Beach EDITION, which features a Jean-Georges Vongerichten-designed restaurant and subterranean nightclub, bowling alley, and an ice skating rink (aptly named BASEMENT). High-rise hotels double as living quarters with residential sections that offer guests the same amenities as hotels—but with a price point to match (not to mention the pulsating music streaming from the surrounding clubs). Another new addition to the neighborhood is the art- and culture-focused Faena District, which has taken over 32nd to 36th Streets and includes a condo, bazaar, amphitheater, and the pièce de résistance—the gold-covered Faena Hotel Miami Beach.

Nearby, coworking space Sandhouse offers a variety of work spaces, as well as recreational areas, bike storage, and monthly happy hours. The neighborhood also started welcoming the nomad set when designer hostel Freehand Miami opened up bungalows, bunked rooms, and one of the city’s best cocktail bars, Broken Shaker, in a Havana-like space just a few blocks from the beach. The Freehand’s lobby and gardens are a great place to post up for the day with a laptop. Nearby, another boutique hotel and hostel brand, Generator, opened its first U.S. locale just 100 feet from the sand. If you’re a member of Soho House, Soho Beach House is just a few blocks away and one of the best spots in Mid Beach for a day of coworking, especially from the oceanview terrace that sits off of the Library.

The area caters more to travelers who want the combination of nonstop nightlife, world-class cuisine, and buzzy lounges—plus beach clubs belonging to the string of high-rises lining the water. While less suited to remote working than South Beach, Mid Beach offers a range of accommodation styles from condos and apartments to hotel residences, as well as easy access to bars and restaurants. 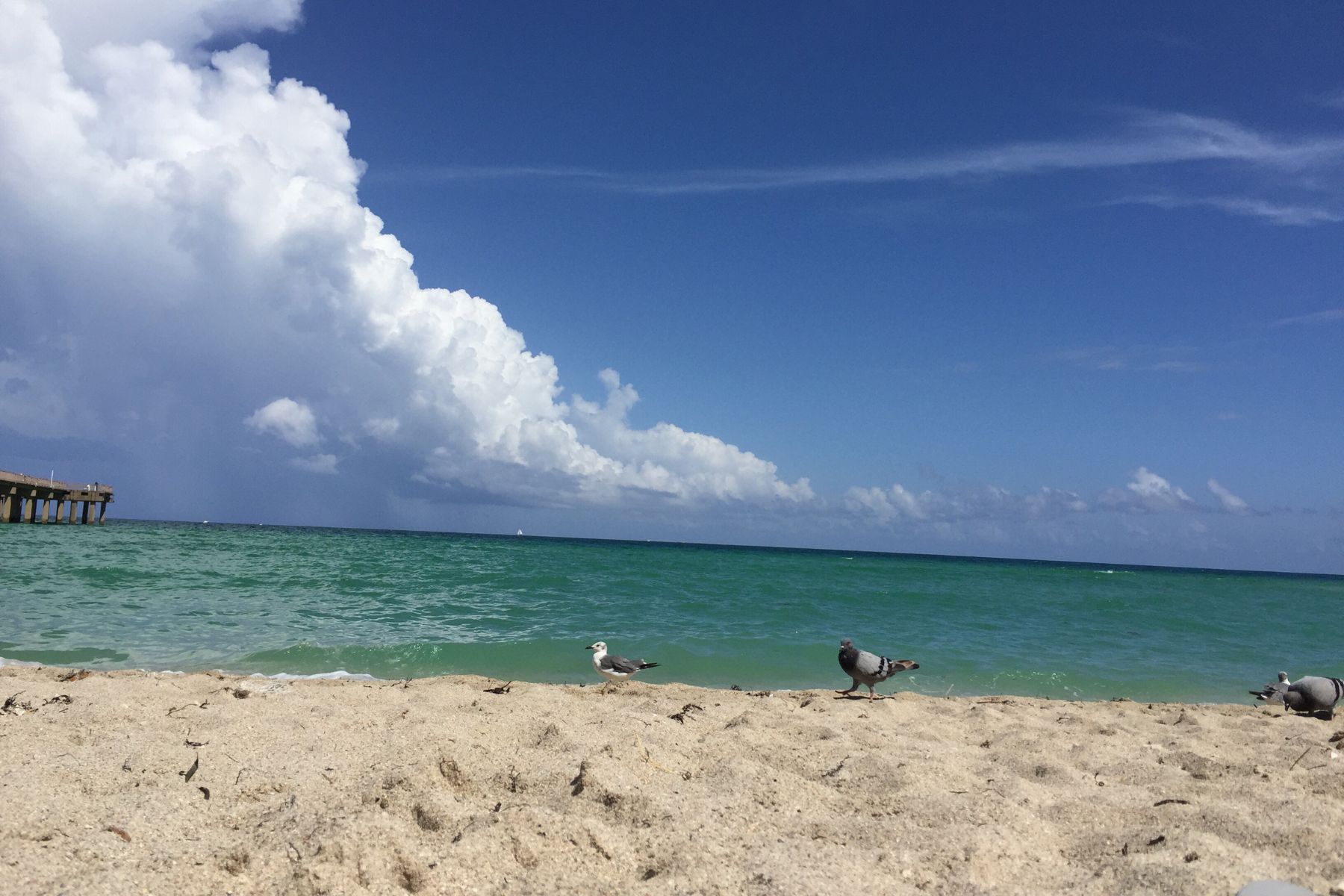 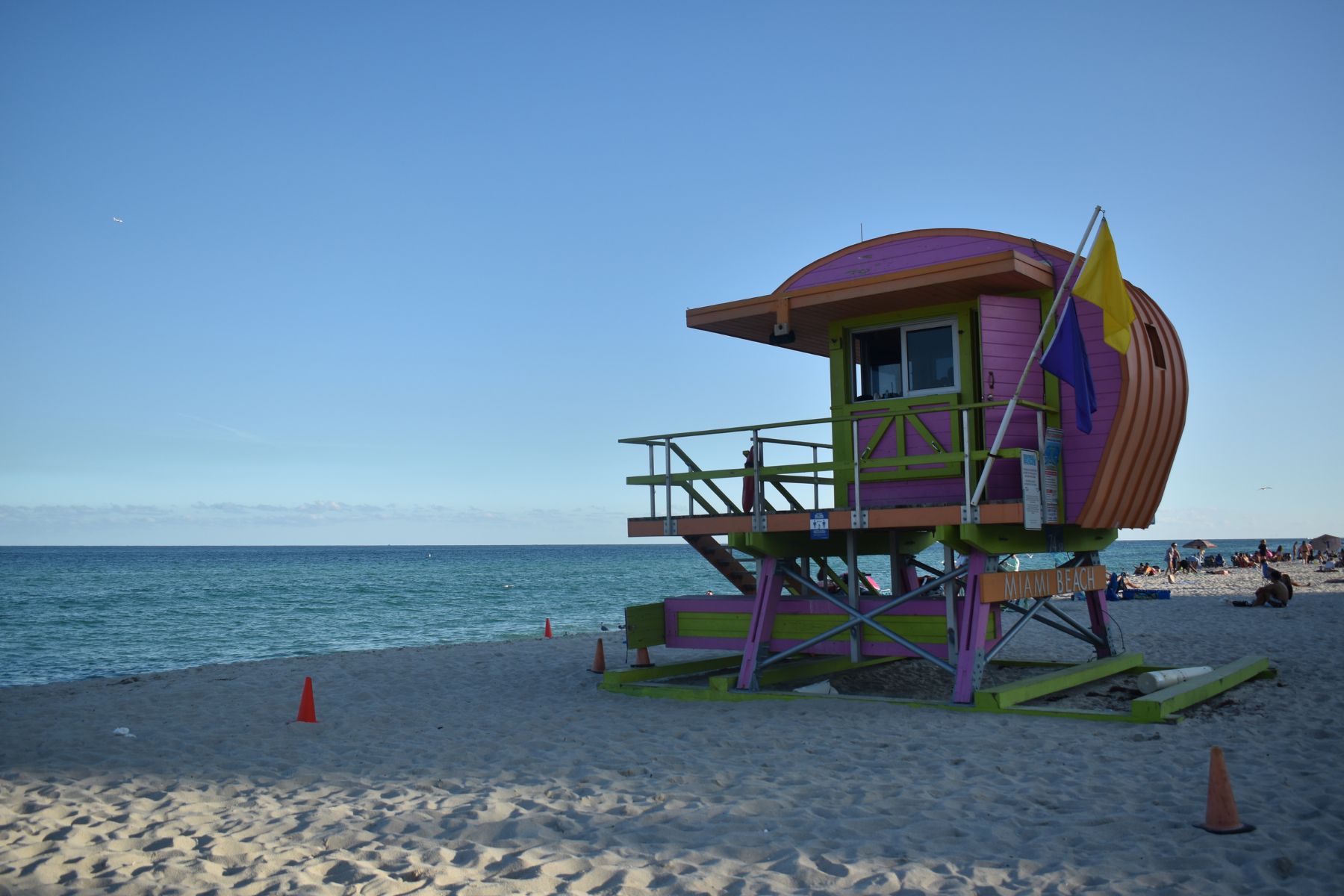 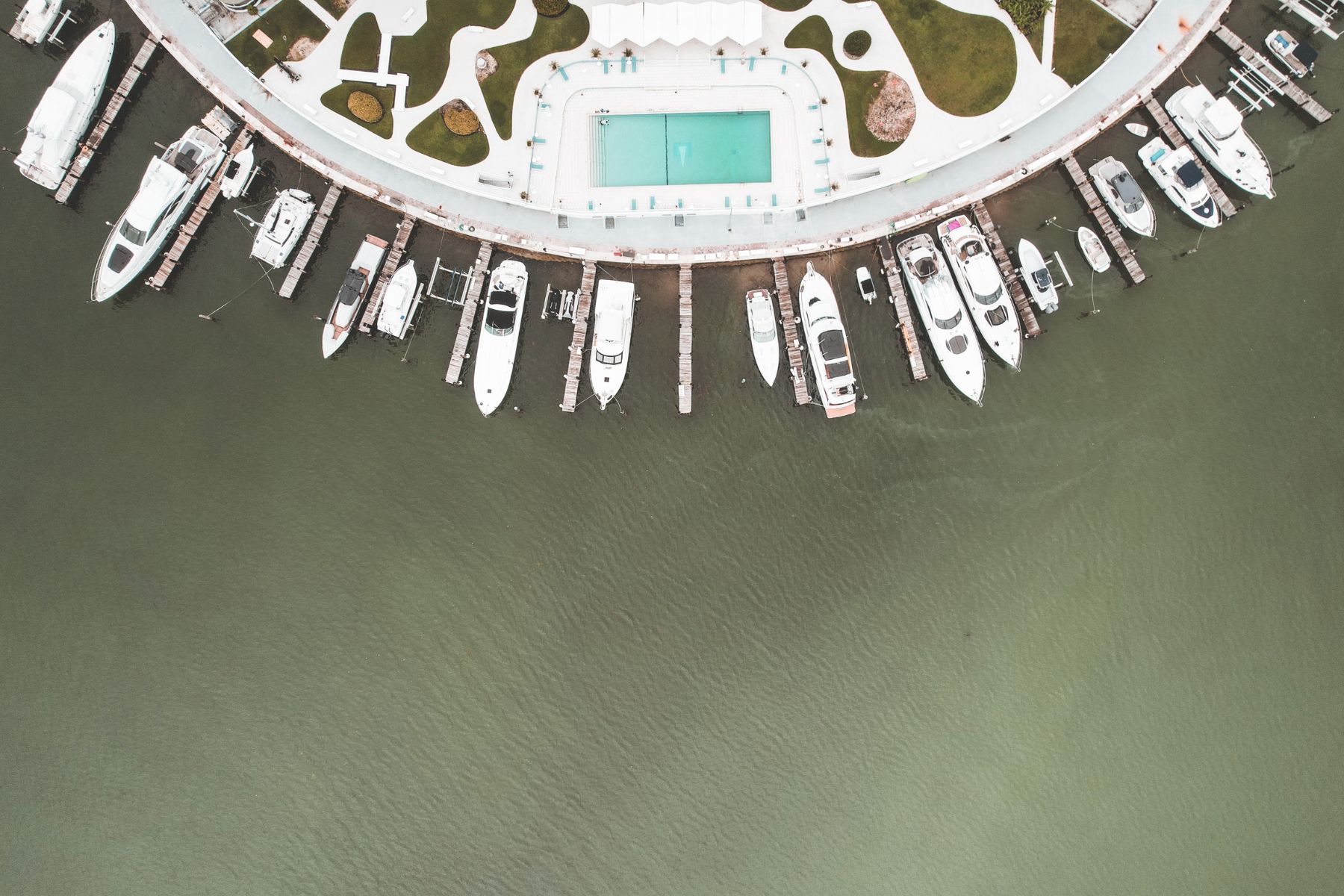 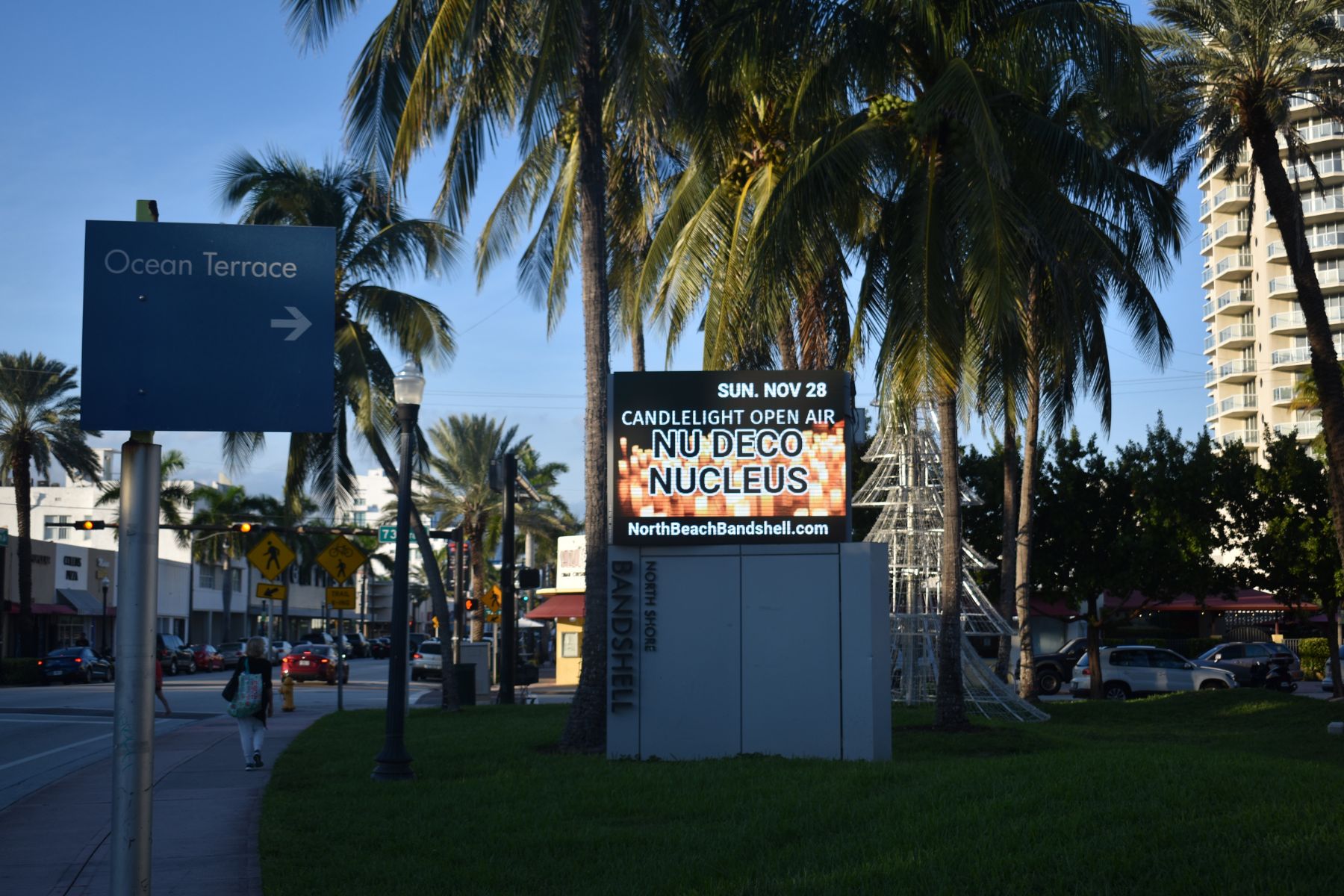 If you’re looking to be close to the Miami Beach buzz but want something on the quieter side, North Beach is a residential, family-friendly option. The neighborhood is much more laid-back than the rest of Miami Beach, and even the architecture is distinctly different. Here, Miami’s defining Art Deco buildings are replaced by Miami Modernism (MiMo) architecture. One of the main draws to the area is the nine-block North Beach Oceanside Park, which stretches from 78th Street to 86th Street, and features grills, picnic tables, and pavilions. There are also dog runs and a beachfront with lifeguards that is much less crowded than other stretches of sand on Miami Beach. Just outside the park, you’ll find a Citi Bike stand, if you want to rent a bike and take a spin for an 8-mile ride down to South Beach. You can also stroll along the paved, oceanfront Beach Walk that connects North Beach with Mid and South Beach.

Another perk of the neighborhood and Miami's good weather are golf and tennis clubs like the Normandy Shores Golf Club, where legend Arnold Palmer has played, and a tennis center that sits across from the centerpiece North Beach Bandshell amphitheater, which hosts everything from music festivals to drag brunches and performances by the likes of Ben Folds and Diplo. The culinary hotspots are centered around South and Mid Beach, but North Beach is rich in international cuisine that nods to the many communities who have lived here. Carillon Miami Wellness Resort is one of the best spas in the country and is perfect for those seeking a health retreat. Plus, the hotel’s ocean-facing eatery, The Strand, is popular both for its views and Florida-fresh Mediterranean fare. Around the historic Normandy Fountain, you’ll find Jewish delis and Italian eateries, as well as nearly every type of Latin American fare. One top pick for pastries while working: Buenos Aires Bakery & Café.

Since the neighborhood is on the residential side, you’ll find fewer amenities catering to remote working, but with a higher safety factor and more affordable price points, North Beach is an attractive place to reside or visit for the day to enjoy the natural beauty and beaches without having to struggle to find a stretch of sand to lay out on. 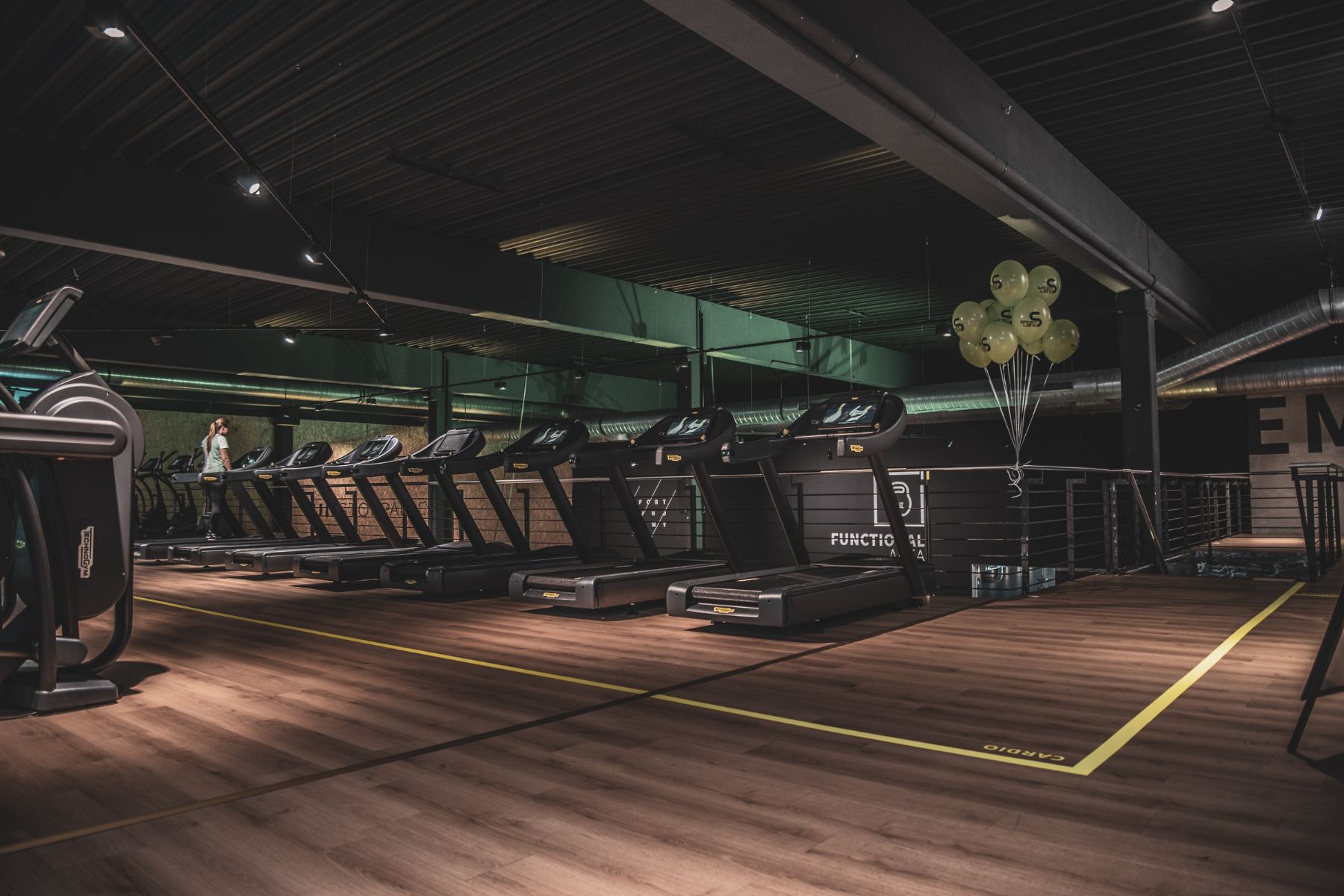 The 10 Best Gyms in Miami
People from Miami are serious about fitness. With so many beaches to show off on, the South Florida metropolis is home to a huge health and wellness industry and because of the great weather, many residents are active year-round, taking advantage... 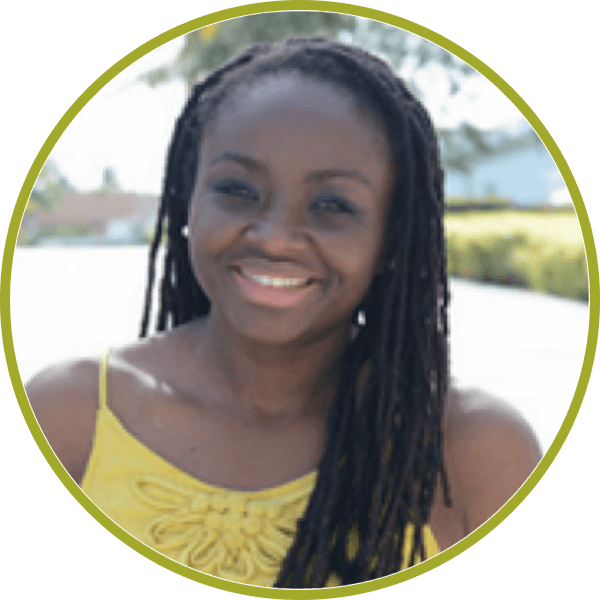